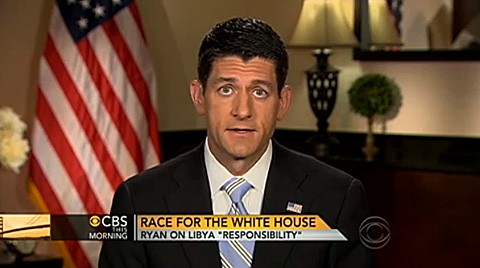 Paul Ryan says he disagrees that Romney being fact-checked by Candy Crowley on Libya was his weakest moment. Ryan also tries to clarify the “binders full of women” remark:

All he meant was that he went out of his way to try and recruit qualified women to serve in his administration when he was governor. And by the way, he has an exceptional record of hiring women in very prominent positions in his administration, and that’s the point he was making.

However, as I noted this morning, David Bernstein wrote in The Phoenix that this whole binder story is a big lie:

I will write more about this later, but for tonight let me just make a few quick additional points. First of all, according to MassGAP and MWPC, Romney did appoint 14 women out of his first 33 senior-level appointments, which is a reasonably impressive 42 percent. However, as I have reported before, those were almost all to head departments and agencies that he didn’t care about — and in some cases, that he quite specifically wanted to not really do anything. None of the senior positions Romney cared about — budget, business development, etc. — went to women.

Secondly, a UMass-Boston study found that the percentage of senior-level appointed positions held by women actually declined throughout the Romney administration, from 30.0% prior to his taking office, to 29.7% in July 2004, to 27.6% near the end of his term in November 2006. (It then began rapidly rising when Deval Patrick took office.)

Watch Ryan’s interview, AFTER THE JUMP…

Website link HERE, for those of you on mobile. There may be some trouble with the CBS embed. I’ll try to find a better one as soon as I can.