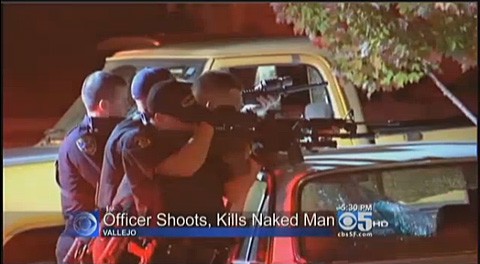 A bizarre and violent episode in Vallejo, California ended after officers responded Sunday to what CBS News describes as a "drug-filled rampage" at a burning home:

Jeremiah Moore, 29, was shot and killed by authorities during a bizarre incident that investigators said was fueled by hallucinogens – possibly a toxic combination commonly of drugs known as “bath salts.” On Sunday, officers received calls from neighbors that two men, later identified as Moore and his partner, Jason Jessie, 28, were naked and running in the street, allegedly breaking the windows of cars parked in the neighborhood.

When police arrived at approximately 1:30 a.m., Jessie apparently ran back into the home he shared with Moore on the 2500 block of Alameda Drive, according to investigators. Moore subsequently emerged from the home, which police said began filling with smoke. He then reportedly placed the barrel of a rifle against an officer’s stomach, police said.

It was then that Moore was shot by officers. Three birds were also found later, beheaded in the backyard.

Watch the CBS News initial report, AFTER THE JUMP…

Web link here for those on mobile.