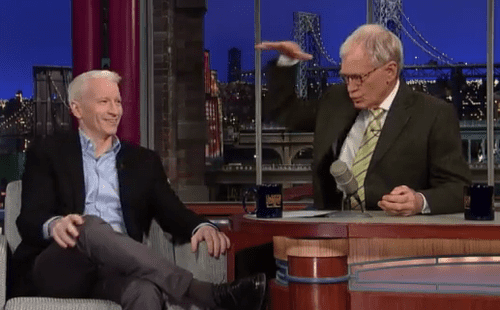 Anderson Cooper stopped by David Letterman's Late Show last night and while there was asked whether, as a homosexual, he has "gaydar."

Telling the talk show host that he prefers the term "light in the loafers," the CNN anchor explained that, sure, he can sometimes tell people are gay, but others slip under the proverbial radar. Letterman, Cooper said, was indeed pinging it, though that may have just been the scotch the men shared at the start of the segment.

On a serious note, Cooper expained to Letterman why he decided to come out of the public: "As a member of a community in this country who is concerned about the well being of this country and the well being of people in the community I didn't want to be sending in any way, I didn't want anybody interpreting my silence on the issue as being somehow that I was ashamed of something or was trying to hide something."

Watch the "gay-dar" and fist bump segments of the chat AFTER THE JUMP as well as Cooper and Letterman's discussions about Hurricane Sandy, the election and Dick Morris.