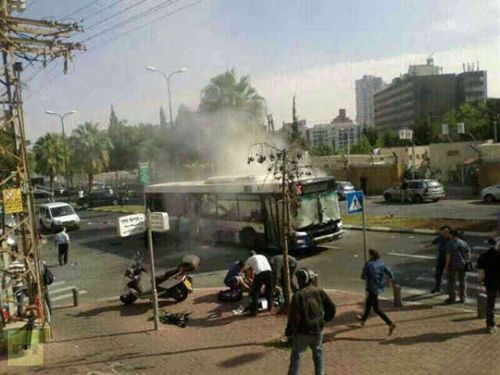 At least 21 have been injured in a bus attack in Tel Aviv, the first terror attack there since 2006, according to live reports. The attack has set off another round of Israeli air strikes in Gaza. The Guardian reports that more than 130 Palestinians have been killed in the conflict.

The explosion came as Secretary of State Hillary Rodham Clinton pursued diplomatic efforts to end the fighting. She planned to fly to Cairo Wednesday after talks with Israeli leaders in Jersualem and Palestinian leaders in the West Bank.

On several occasions since the latest conflagration seized Gaza last week, militants have aimed rockets at Tel Aviv but they have either fallen short, landed in the sea or been intercepted. Hundreds of rockets fired by militants in Gaza have struck other targets.

But the bombing seemed to mark the first time in the current fighting that violence had spread directly onto the streets of Tel Aviv.

A video report on the bus, AFTER THE JUMP…

In other news, Gay Star News reports that a gay Palestinian couple have been killed in the conflict:

The two men, one aged 21 the other 31 years-old, were spending time in their apartment on Friday evening (16 November), when a bomb hit the apartment building. The two were killed on the spot.

Amnesty has so far estimated that at least 66 innocent Palestinian civilians killed by the Israel's military operation ‘Pillar of Cloud’ that launched on 14 November, with many more wounded and made homeless.

A Palestinian lesbian activist reported that several of her family members were gravely wounded by the Israeli bombardment on Monday (19 November). They were so badly wounded that they had to be taken to Cairo for medical treatment where they are struggling for their lives.

A video report on the bus, AFTER THE JUMP…