President Obama has unveiled his gun plan, the HuffPost reports: 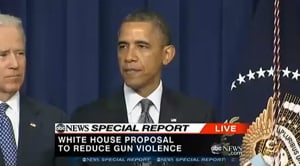 The proposal, which comes at the end of a month-long review process spearheaded by Vice President Joe Biden, is broken down into four key subsections: law enforcement, the availability of dangerous firearms and ammunition, school safety and mental health.

In an effort to touch on all four of those elements, the president recommended requiring criminal background checks for all gun sales; reinstating the assault weapons ban; restoring a 10-round limit on ammunition magazines; eliminating armor-piercing bullets; providing mental health services in schools; allocating funds to hire more police officers; and instituting a federal gun trafficking statute, among other policies. The cost of the package, senior officials estimated, would be roughly $500 million, some of which could come from already budgeted funds.

Because these recommendations require congressional approval, the administration is supplementing its proposal with 23 executive actions that will be taken immediately. Those actions include requiring federal agencies to hand over relevant data for a background check system; providing law enforcement officials, first responders and school officials with better training for active shooting situations; directing the Centers for Disease Control to research the causes and prevention of gun violence; and many more.

Watch part of his press conference, AFTER THE JUMP…