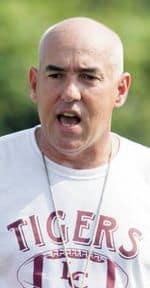 The investigation includes a 1-minute, 24-second audiotape of Grisham asking who knows who is behind the 600-calorie school lunch.

Male voices interject comments during the discussion, at one point referring to Michelle Obama as a “fat gorilla.”

Later in the tape, Grisham referred to the U.S. as going in the “wrong direction” and tells the students they can “get pissed off at me or not. You can go tell the principal, call the superintendent and tell her. I don’t believe in queers. I don’t like queers, I don’t hate them as a person, but what they do is wrong and an abomination against God.” The tape was reportedly recorded by a student Monday and took place on school campus during the school day.

Grisham told the TimesDaily on Wednesday afternoon he misspoke. “I misspoke in a debate-type situation,” he said. “I have no hatred toward anyone or any group. People that know my heart, they know that.”

Listen to Grisham's rant, AFTER THE JUMP…

Previous Post: « Martin Moran’s ‘All The Rage’ Opens Off Broadway: REVIEW
Next Post: The OXD Mirror: New Music for 2.1.13 »