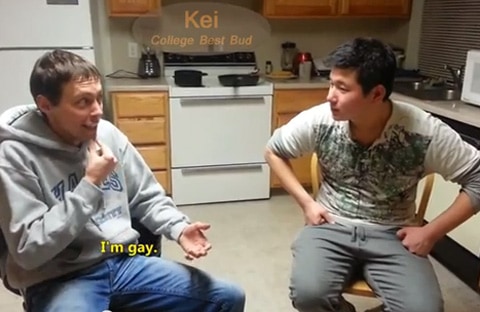 Jimmy Hales is a gay BYU student and Mormon missionary. For an entire year he has been coming out to friends and family and capturing it on film. 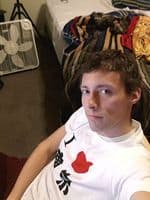 Hales wrote a detailed blog post in which he describes his experience coming out as a Mormon along with the making of the film.:

So today has arrived.  G-day.  I have officially come out.  Wow.  A year ago I didn't even think of myself as being gay; denial owned my face.  But I was getting older, 3 of my 5 roommates here at BYU were engaged and the majority of my closest friends were already married.  The only people at parties were freshmen and sophomores, and the things they did at the parties were boring.  Personally I feel like an OK dancer, but "Just Dance" kept giving me the lowest score at the party.  Why did people go to these lame things?  Oh, to get a date.

Then suddenly I had a thought: 'I feel like I should make movies again like I did in high school.  Sounds good to me.'

Hales began shooting his coming outs to friends and family in January 2012 and says he just finished this month. 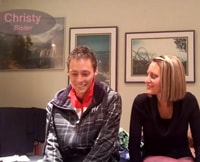 When it came time to edit the footage, I ended up cutting well over half of the script.  In fact, I cut the parts that I initially thought were most important.  Similarly, while searching online for some royalty free music, I felt I should just write the music and record it myself, so I did.  That's why the music is lame…

…At this point, me being gay it not such a big deal to me or those close around me.  I believe, with time, it won't as big a deal to all members of the church either.  They just need opportunity to think about it, so here I am posting about it.  Every Mormon I've come out to has been awesome.  Soon enough, gay people will be able to come out and not be as afraid to do so.    However, there will always be a certain stigma attached to it to some degree, for living a lonely celibate mortal life is a taste of hell, and the possibility that a person might "fall away" is always possible.  If you know someone who has fallen away, please try to understand that they've been through hell, and that they've probably gone through hell all by themselves with little or no help.  Please love them.

Previous Post: « Lance Bass, Susan Boyle, and the Village People ‘Keep an Open Mouth’ for Miracle Whip: VIDEO
Next Post: Frank Ocean Has Recorded 11 Songs for His Next Album »