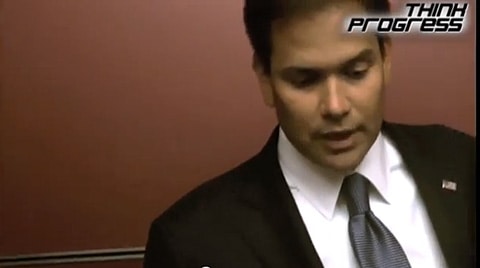 Think Progress caught up with Senator Marco Rubio today in an elevator at the opening luncheon of the annual Faith and Freedom Forum and asked him about the Employment Non-Discrimination Act (ENDA).

"I haven’t read the legislation. By and large I think all Americans should be protected but I’m not for any special protections based on orientation."

It was the second fail on LGBT civil rights for Rubio in 24 hours.

Earlier, he said he's finished with the immigration bill if it includes gay couples:

"If this bill has something in it that gives gay couples immigration rights and so forth, it kills the bill. I'm done," Rubio said Thursday during an interview on the Andrea Tantaros Show. "I'm off it, and I've said that repeatedly. I don't think that's going to happen and it shouldn't happen. This is already a difficult enough issue as it is."