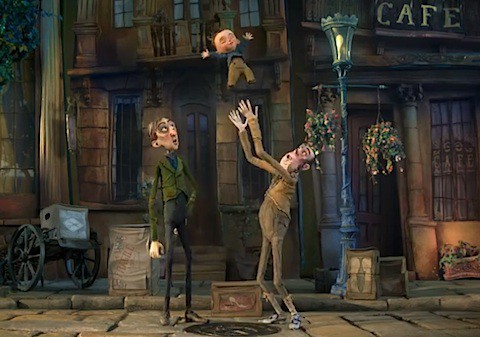 The new trailer for The Boxtrolls, from the creator of Paranorman, features a gay family, The Hollywood Reporter reports:

"Families come in all shapes and sizes," says the narrator. "Even rectangles."

That this decidedly upbeat and inclusive message should arrive on the most eventful week in gay rights history — one that saw both DOMA and Prop 8 struck down by the U.S. Supreme Court — is just a happy bit of happenstance for Laika, the rare mainstream studio to incorporate gay-positive depictions in their family films.

For Travis Knight, the 39-year-old president and CEO of Laika and an accomplished stop-motion animator in his own right, finding stories that send kids the right kinds of messages — and not necessarily the safest ones — is a top priority.

Watch teh trailer, AFTER THE JUMP…

Previous Post: « The Best TV Shows On Netflix
Next Post: What’s Next: The Importance of the President in a Post-DOMA World »