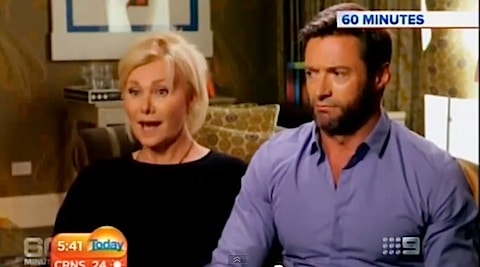 In what has become a biannual event, Hugh Jackman and his wife  Deborra-Lee Furness appeared on Australia's 60 Minutes to roll out complaints about how tired they are of the gay rumors that follow Jackman.

Said Jackman: "If I was [gay], I would be…It's to me not the most interesting thing about a person anyway, but I do get frustrated for Deb, because I see Deb go 'Ah, this is just crazy'."

Said Furness: "It is just wrong, it's like, it's a lie…It's just offensive. If he was gay, fine, he would say he's gay. It has gotten so out of whack … it's stupid, and yeah, it's annoying, because it's not true."

Previous Post: « Andrew Sullivan: If Catholics Can Live with Divorce, Then They Should Be Fine with Gay Marriage – VIDEO
Next Post: On Canada Day, an A Cappella Take on Their National Anthem: VIDEO »