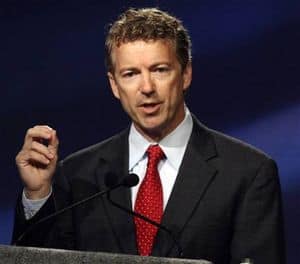 Rand Paul, the Republican senator from Kentucky, is no stranger to Towleroad, given some of the comments he's made in the past. The bombastic senator has previously linked marriage equality to "polygamy" and "non-human marriage", and also encouraged anti-equality advocates to do everything they can to delay marriage equality at the state level. Paul is making even more headlines today, thanks to a profile of the senator's opthalmology practice in National Review Online, in which he compared social safety net programs, such as food stamps, to forced slavery.

According to ThinkProgress, this isn't the first time Paul has falsely linked the two phenomena:

"The comments are an echo of his 2011 claim that accepting a human right to health care 'means you believe in slavery,' but the Senator’s new variation on the theme is notable because it puts the reasoning behind the crazy in stark relief."

The quote in question ironically comes from a portion of the profile that claims that Paul "loves people": 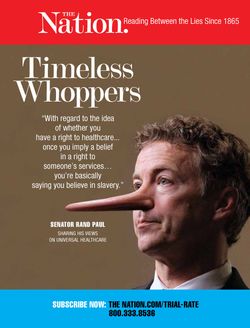 Ironically, he has compared food stamps to slavery in two aspects. The first is the statement you see above: providing someone with food, water, and shelter automatically makes them indebted and subservient to you. He has also made the logical leap that providing people with food stamps means the forcible seizure of food, the by-product of workers such as farmers and manufacturers. ThinkProgress thankfully pointed out several flaws in Paul's logic. First, most academics have accepted the fact that this country currently produces enough food to feed everyone in it. Also:

"A moderately bright high school student could spot the leap of logic here: no one’s forcing anyone to farm against their will. In a democratic-capitalist economy, people have a right to choose their career… A socially-accepted “right to food” merely means the government should pay for the provision of food to those who can’t afford it. No stealing, and definitely no slavery…

"So an influential Senator, a much-ballyhooed candidate for his party’s nomination for the presidency, has been consistently espousing a worldview, reflected in his budget, that logically implies virtually all major government programs are slavery. And we live in times where that’s acceptable enough that it’s buried in the middle of a piece about volunteer ophthalmology."

Of course, the fact that quote comes from a piece about volunteer opthalmology makes it sort of doubly ironic. According to the piece, Paul performs approximately 10 to 15 pro bono eye surgeries a year. He says that “I’ve always done some since I’ve been in practice, because I wanted to be able to give back to the community." Would that sort of admission constitute a slavery of Paul by his less fortunate patients? Precisely what difference is there between slavery, by his standards, and "giving back to the community"?