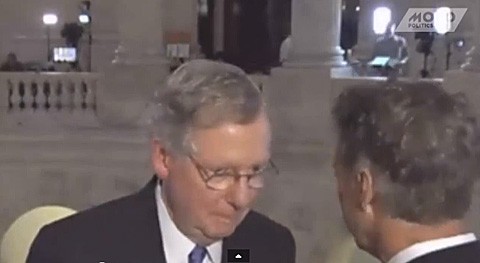 Rand Paul and Mitch McConnell work out their shutdown messaging strategy over a hot mic:

McConnell responds: "Yeah, I do too, and I just came back from the two-hour meeting with them, and that was basically the same view privately as it was publicly."

"I think if we keep saying, 'We wanted to defund it. We fought for that, but now we're willing to compromise on this,' I think they can't – we're going to win," Paul says. "I know we don't want to be here, but we're going to win this, I think."