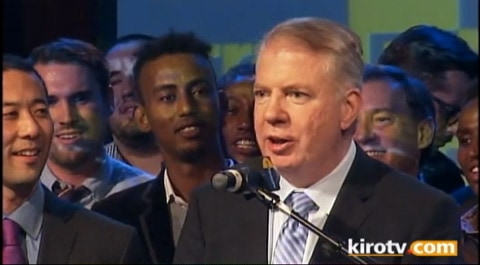 Murray grabbed a commanding 56 percent of the votes counted on election night, compared with 43 percent for McGinn.

At a jubilant party at Neumos on Capitol Hill, Murray took the stage before 9 p.m. to cheers and hugs from supporters, including a pack of elected leaders who’d endorsed him.

Signaling the change in tone he hopes to bring to City Hall, Murray said his campaign “was energized by the belief that Seattle can show the nation that government can work once again.”

Although he acknowledged votes remain to be counted, Murray said if current trends hold, “we are here tonight to declare victory.”

About 90,000 votes were counted in the mayor’s race Tuesday. If King County elections officials’ estimate of 57 percent turnout in Seattle hold, McGinn would have to capture 54 percent or more of the remaining votes to make up his big deficit — a virtually impossible task.

Watch raw video from KIRO, AFTER THE JUMP…