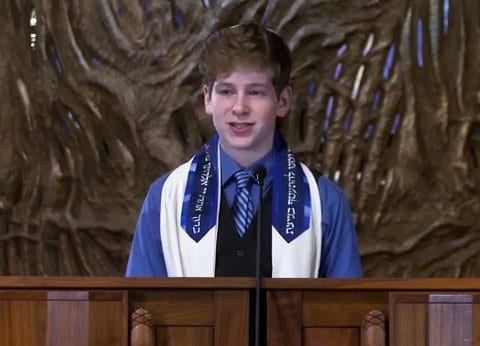 In his speech, Sennett recounts the story of Jacob, who worked for seven years to marry a woman he loved named Rachel. Before Jacob got to marry Rachel, he was first tricked into marrying her sister Leah — the daughters had no say, the entire thing was handled as a sort of crude business deal and Jacob ended up in an incestuous marriage with his two first-cousins.

Kinda makes you wonder if the National Organization of Marriage is actually pushing for "traditional marriages" that are more akin to incestuous human trafficking.

Read and watch Sennett's speech AFTER THE JUMP…

"Shabbot shalom. In my Torah portion… Jacob works for seven years to earn the right to marry Laban's daughter, his love Rachel. Before marrying Rachel, Jacob is first tricked into marrying her older sister Leah. I find my parsha interesting because it is a window into what was life was like back in the days of the Torah.

"Leah and Rachel had absolutely no say in marrying Jacob — it was like a business deal between Jacob and Laban. Today in the United States, marriage is very different. No longer do the fathers arrange marriages (NOTE: That's not entirely true, but we'll let it slide) and women can marry whomever they want.

"While studying my Torah portion and comparing and contrasting marriage — past and present — I found it would be irresponsible to exclude the topic of gay marriage. I am a very very strong supporter of equal rights and the freedom of men and women to marry whomever they love.

"People who disagree with me like to quote the Bible and say that traditional marriage should only be between one man and one woman. But after seeing my Torah portion that I've just read, the definition of traditional marriage is nothing like what people think it is today. Jacob married two sisters who were his first cousins.

"In the US, the movement towards marriage equality has taken a significant step forward this year. As of now, fifteen states plus the District of Columbia have the freedom to marry same-sex couples. On October 18th, here in Oregon, the state agencies decided they must recognize same-sex marriages that are performed in other states even though, sadly, Oregon state still does not allow same-sex marriage to be performed in our own state.

"According to OregonMarriageEquality.com, Oregon currently has a ban between same-sex partners. The domestic partnership law affords them the same rights as marriage but still is not equal in name or benefits. While putting rights up to a vote is never fair, marriage equality will hopefully make it to the Oregon ballot in 2014.

"This subject is not only interesting, but is also very personal. My family is very close friends with many same-sex couples — especially Joe and David, and Jeff and Wade. They have influenced me to go to Prop 8 rallies when I lived in California to support the freedom to marry and they are wonderful people, wonderful parents, and wonderful couples.

"I was at Joel and David's first wedding in California a number of years ago and it was beautiful. I say first wedding because these two courageous men have gotten married in three different states in which same-sex marriage is legal and I hope they will continue until they are married in all fifty states. (applause) They are here to celebrate my Bar Mitzvah with me along with their awesome son Estordo.

"I am proud to be part of a congregation that is one hundred percent in support of same-sex marriage. All clergy have spoken in support of the freedom to marry and are very involved in the Oregon campaign. The congregation formally endorsed the November 2014 ballot initiative and is actively working on the Oregon campaign to allow all Oregonians the freedom to marry.

"My Torah portion taught me that the definition of traditional marriage has changed a lot since the days of Torah. So why can't it change just a little bit more so everybody can marry who they love? And now that I'm a Bar Mitzvah, I will not only continue to support but encourage other people to support equal marriage rights. Shabbot shalom."