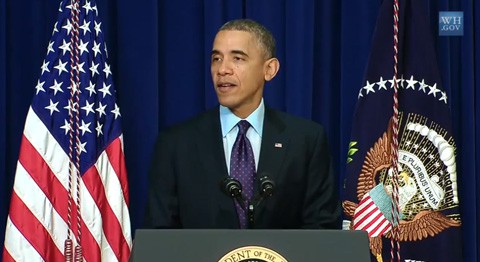 President Obama held a World AIDS Day event at the White House today at which he announced a $100 million initiative to develop a cure for HIV, the Washington Blade reports:

“The United States should be at the forefront of new discoveries in how to put HIV into long-term remission without requiting live-long therapies, or better yet, eliminate it completely,” Obama said.

In a fact sheet published after the event, the White House clarified the $100 million would be distributed over the course of three years and would catalyze further research for new therapies to improve outcomes for people with HIV.

Rowena Johnston, amfAR’s vice president and director of research, said in a statement after the event the administration’s efforts to find a cure for HIV would build off previous successes in the past year.

“This year, we saw a series of breakthroughs in HIV cure research that have brought us more clarity than we’ve ever had on the precise steps and tools needed to finally end AIDS,” Johnston said. “We cannot achieve the President’s goal of an AIDS-free generation without continued investment in the research necessary to ultimately help us find a cure for this disease.”

More at The Blade…

Obama also said he plans to sign into law the PEPFAR Stewardship and Oversight Act of 2013, which extends the Bush-era President’s Emergency Plan for AIDS Relief to confront HIV/AIDS overseas. And added that wait lists for federal drugs for HIV/AIDS had been eliminated as part of a $35 million initiative implemented two years ago.

Watch full remarks from Secretary of State John Kerry and Obama, AFTER THE JUMP…