Arizona State Senator Steve Gallardo came out of the closet in a meeting with reporters on Wednesday, the Phoenix New Times reports: 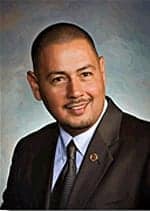 Sitting in the Senate Caucus room with a handful of reporters, a little more than a week after he delivered a rousing speech to activists protesting against an anti-gay measure, Senator Steve Gallardo says that it's time to lay it out there.

He says that watching activists fighting against SB 1062, a bill that provided legal cover for business owner who chose to discriminate against gays and transgender persons, inspired him to speak out.

Gallardo said he was hit with a revelation during the debate over the bill in the state senate:

"After I stood up on the floor and argued against 1062, as I've done on many bills before, I saw down and said, 'Wow. This bill affects me. It affects me directly'…I thought it's time. It's time to let people know about me. And to send people a message. I'm more interested in letting people who struggle with this know that it's okay."

Gallardo said he doesn't care how it affects his congressional aspirations.

Gallardo said he intends to serve out the rest of the legislative session and has no plans, at this point, to resign as he pursues the congressional seat.