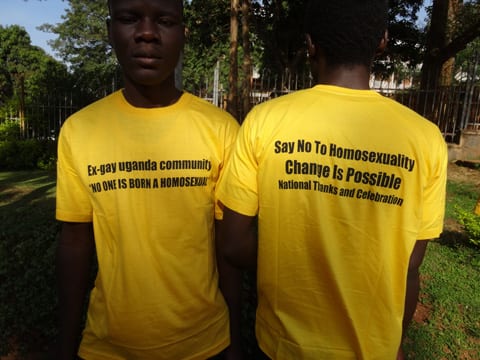 When we arrived at security again, they wouldn’t let me in with the camera. While Georgina trooped the Ex Gays into the event, I patiently waited in my Ex Gay t-shirt and 'TEAM USA' Olympic hat for him to get permission for me to come in. Many Christians came up to me trying to intimidate me. I told them to calm down, everything was okay. I chatted up the army soldiers who were nice to me and they offered me a chair in the shade. It was clearly a very carefully planned and managed event, — a rarity in Uganda.

Finally a top Christian and an army major came up to me to ask what I was doing there. I explained that I was waiting for Georgina, the Chairman of Ex Gay Uganda. Again, Georgina had asked me to use that name, but the officious Christian was startled by it. He asked my name and to see my ID. My Massachusetts drivers license has a picture of me with my hair. So when I presented my ID to the Christian he looked at it, looked at my t-shirt and then looked at my face and asked “Are you ex gay?”

This was the first real test for me. How far would I go in denying myself to play out this charade? Instinctively, I said no, I was wearing the t-shirt in support of Georgina. Then as if in a Hollywood film I heard Georgina’s lilting voice call my name out from behind me. The Christian and the army officer immediately looked at him prancing down the hill, with very confused expressions. While they were transfixed by the ex transwoman-cum-Chairman of Ex Gay Uganda, I slowly took my ID back. Georgina convinced them to allow me in without my cameras. So I left my camera with Haji. But In Uganda everyone has at least two cell phones. So they had no problem with me taking in my two cells and mobile wifi. They didn’t realize my American cell phone was a video and still camera as well.

Next thing you know I am in the rally and sitting next to Georgina surrounded by all the Ex Gays, thankfully under a tent, but in 100+ degree heat. And I had boots on because the last time I went to a demonstration in Uganda the riot police attacked us and I had to jump over a sewer to get away. The rally was presided over by President Museveni and every religious and cultural leader in Uganda.  Everything was in yellow. From the school kids' choir outfits to the tents covering the at least 30,000 people, to the very Ex Gay t-shirt I was wearing. Yellow is the color of the NRM, Museveni’s political party. This was more a political rally then a religious celebration. 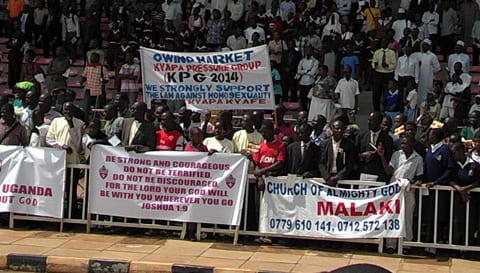 I looked at the faces of the Ugandans as they passed our group, first fixed with confusion from reading the t-shirts, then hatred. I just smiled back. It just confused them even more. But I was also one of the handful of whites at this event.  I talked with some of the Ex Gays later and they confirmed that they felt unsafe there. That they thought some people were going to attack them then and there. Why not? The President of Uganda told the people he was ready for the war with the gays. Sounded like 'open season' to me.

We were so late in arriving that Georgina missed his chance to speak on national TV because we were not seated with the VIPs. He handed me his speech and I tweeted a photo of it. I thought how very fortunate that he never got to give this speech. It is one thing for straight homophobes to get up there and spew hate but for an ex transwoman to do it would be another story indeed. The damage he would have done would have been profound. 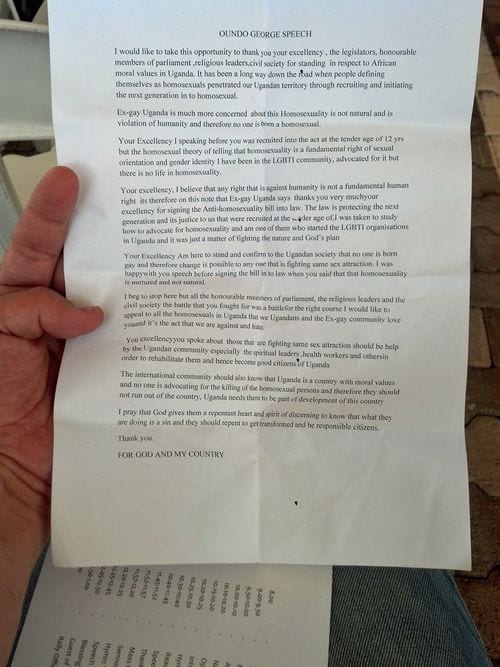 At this point the adrenaline rush of being admitted to the event was wearing off. I looked at how the Ex Gays were all relating to each other. They were friends and smiled a lot at each other. They were all handsome, fit, polite, soft spoken and very poor. According to Haji, Georgina was there for the money.  But the others? Each of them had their 'seduction by a foreigner' story, which at times, also sounded like the tales of jilted lovers. Another common element of their stories was the loss of family and community for being gay.

Because there are no jobs in Uganda they depend economically and emotionally on their families and community. There is no real organized gay community to rely on or be a part of. They were being Ex Gay because they couldn’t live without their family or community. It was better to lie to even themselves, than to be hungry, homeless and alone. Even with this sacrifice of their gayness, they believe they are still in danger. That being Ex Gay won’t save them. All of them felt frightened that day, except Georgina. They wanted to know about asylum in other countries. I truly felt pity and love for them. I could only be kind and warm with them. The only medicine for their internalized hate is unconditional love. Georgina aside, I believe these Ex Gays are the victims of homophobia. And that the law will create many more. It will pervert the souls of the next generation of LGBTI Ugandans now growing up. Talk about child molestation. The suicides have already begun. 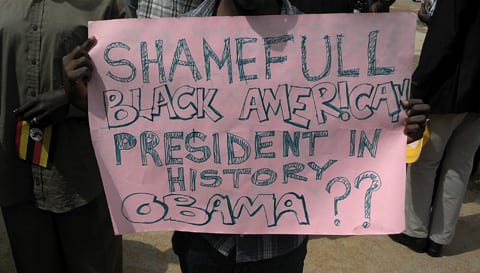 Hours of hateful speeches by the religious leaders and kids groups singing songs like “Bye Bye Homosexuality”. The Ex Gays were singing it as well. When Pepe and I had discussed my attending this event I told him that I needed to feel with my own heart the hatred that he felt every minute of the day in his country. I was very much feeling the hate and realizing that this event would forever change how Ugandan society deals with LGBTI people. This was the start of a Ugandan LGBTI genocide.

Finally, Museveni drove up on the stage in his version of the 'Pope mobile'. I stood up, not out of respect, but because I wanted to see him with my own eyes and feel his hate in my heart. Clearly the gay issue is being used by him and his party to divert attention from the poverty, unemployment, terrible roads, poor schools, lack of healthcare and all the oil money and USAID money he is stealing.

“I want to thank honourable (David) Bahati and his group. I didn’t pay attention because I was involved in other sectors and little did I know it was a big issue. However, when big countries started giving us orders, I don’t like orders, especially from outside and I don’t know why these people became preachers for others?”

"I came to learn that homosexuality was unhealthy and this is because they go to a wrong address(anal). Sexual organs of a human being are highly specialised."

"Oral sex is an idiocy, the mouth is for eating not gonnorhea."

“There is a fundamental misunderstanding between us and the liberal west. They say that homosexuality is sex. But it is not sex…. if you take homosexuality, they (the Ugandan people) don’t call it ‘sex’. They call itekifire.”

Translated, it means gay sex is zombie sex, not dead and not alive. Other words used that day were criminal, animal and devil, all code words to dehumanize gays. Ugandans now have permission from all their “leaders and God” to wage war on the homosexuals. Mob justice is an ever-present danger here. Mobs of men attack women for wearing outlawed mini skirts. The police parade and undress trans women on TV to prove they are not women. The pageantry, the stage management, the propaganda, the manipulation of the people, all hauntingly Nazi-like. This National Thanksgiving was the kickoff of Uganda’s Final Solution for gays. 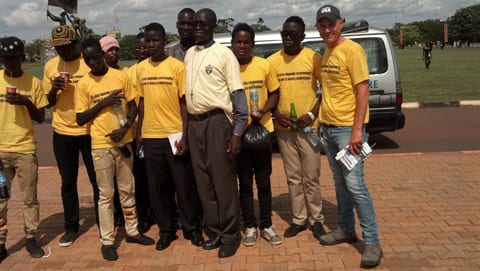 When it was over Georgina pushed us all through the crowd to get to the VIP section so we could get photos with all the top homophobes. I couldn’t resist getting in the photos. They  were all congratulating each other. Very happy and satisfied that they did their Gods work that day that the evil was clearly pointed out and a stand was taken.

I left there quite drained by the whole thing. I had to get to the car so I could take off the t-shirt both because of what it said and because it was new with the chemicals in it and i was sweating so badly. I showered the first chance I got. I will frame the t-shirt in double sided glass. I know in my heart that this was the beginning of a LGBTI genocide in Uganda.

Voices of the Abasiyazzi – Sharing Hope + Creating Allies is, at the heart of it, a visibility project. We supply Ugandans with the tools they need to create change and to seize control of the dialogue around sexuality and gender identity. We have been distributing cameras and editing equipment to LGBTI Ugandans to conduct interviews with LGBTI Ugandans. The interviews are edited into very short video clips that share hope with LGBTI Ugandans and creates straight allies. All accessible via cell phones which is how Ugandans get their internet.