Laverne Cox opened the show, which was attended by a group of actual hardened criminals, by discussing a makeover for Conan. Taylor Schilling and Uzo Aduba talked about their crazy fight scene, and Aduba taught Conan to make crazy eyes. Kate Mulgrew says Conan once almost ruined her career by forcing her to perform an Irish jig. Cox talked about her TIME magazine cover, giving trans people a voice, and her brother who is sometimes mistaken for her. Finally, Lea Delaria explains how she taught Natasha Lyonne about lesbian sex.

Watch all the clips (if video thumbnail does not appear, click through on title),
AFTER THE JUMP… 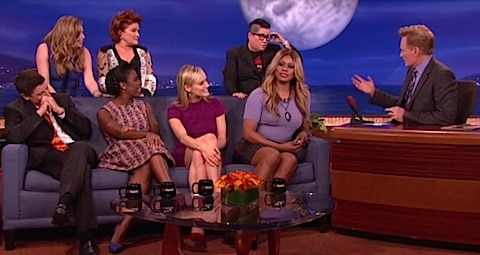