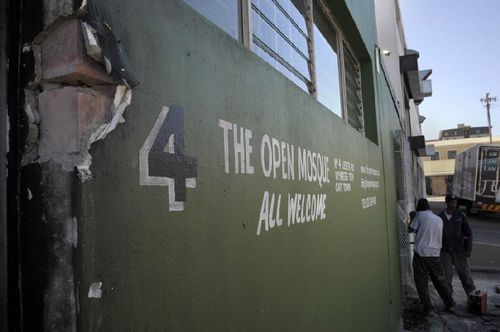 Speaking with AFP, mosque founder Dr. Taj Hargey said video surveillance shows unidentified people making recon trips to the mosque in the hours before the fire. Hargey called the effort a "deliberate attack" noting the use of petrol and oil. But he remained steadfast, saying:

"They [the arsonists] cannot shut us down, they can try whatever they want…They have tried verbal intimidation, threats and now arson, this should be the last…Our opponents should know that they don't have a copyright on Islam."

As referenced in the above quote, this is the latest in a series of hardships faced by South Africa's first gay-friendly mosque. It has drawn denouncements from Muslim groups, and even death threats directed at Hargey.

In the last couple weeks, there was speculation that the City Council of Cape Town might close the fledgling mosque, but Hargey tells the AFP the complaints have been dealt with.

Hargey's mosque, which he emphasizes as open to the public (above) breaks from tradition in several ways. The mosque allows women to lead prayers, and as aforementioned, it is gay-friendly.

Hargey is an academic and founder of Oxford University's Muslim Educational Centre.He has given controversial statements in the past, notably in the Daily Mail, where he argued for a 'burka ban' in the UK and spoke against processed halal meats.

Watch a video from AFP on the Mosque's opening, AFTER THE JUMP…

[image via Rodger Bosch for AFP]