Louisiana Governor and anti-gay “Christian” nutjob Bobby Jindal is claiming in material for a prayer rally to kick off his possible presidential run that Hurricane Katrina and other natural disasters are the result of god’s anger at gay people, reports Right Wing Watch.

Last month, Jindal spoke at an anti-equality, "pro-family" event in Dallas. He has also given anti-gay Duck Dynasty star Phil Roberston an award for Entrepreneurial Excellence.

Jindal is set to kick off the potential presidential campaign in January with a stadium prayer rally organized by anti-gay groups and individuals including listed hate group the American Family Association.

It would appear that Jindal’s campaign is being closely modeled on Rick Perry’s disastrous 2012 run for president. Organizers are actually reusing material from Perry’s 2011 prayer rally in Texas that blame natural disasters on gay people, marriage equality, legal abortion and Internet pornography. 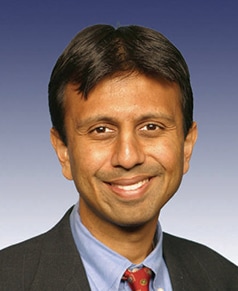 The prayer guide for the rally also appears to be exactly the same as the guide distributed to participants in Perry’s 2011 event.  As Right Wing Watch points out, the materials have not “even been updated to include the increased number of states that are bringing God’s judgment on America by allowing gay and lesbian couples to marry.”

The prayer guide includes the following nuggets of “Christian” wisdom:

“We have watched sin escalate to a proportion the nation has never seen before. We live in the first generation in which the wholesale murder of infants through abortion is not only accepted but protected by law. Homosexuality has been embraced as an alternative lifestyle. Same-sex marriage is legal in six states and Washington, D.C. Pornography is available on demand through the internet.

“Biblical signs of apostasy are before our very eyes. While the United States still claims to be a nation 'under God' it is obvious that we have greatly strayed from our foundations in Christianity.

“This year we have seen a dramatic increase in tornadoes that have taken the lives of many and crippled entire cities, such as Tuscaloosa, AL & Joplin, MO. And let us not forget that we are only six years from the tragic events of hurricane Katrina, which rendered the entire Gulf Coast powerless.”