Former Florida governor and 2016 presidential hopeful Jeb Bush released a new statement today responding to the start of marriage equality in that state. 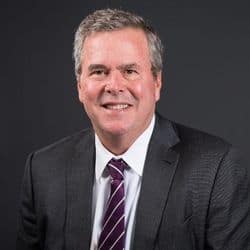 The remarks are clearly a more calculated response (using the religious right's newly-popular victimization rhetoric)  following  spontaneous comments offered on Sunday following a golf match, in which he suggested that gay marriage should be put to a public vote.

The DNC blasted Bush in a statement:

“It took Jeb Bush 69 words to say absolutely nothing — 69 words not to say, ‘I support marriage equality.’ Nothing’s changed,” DNC communications director Mo Elleithee said in a statement. “At the end of Bush’s statement, he still had the same position: he opposes the right of gay and lesbian Floridians — and all LGBT Americans — to get married and adopt children."

Previous Post: « What To Watch This Week on TV: ‘Looking,’ ‘Glee’ Return
Next Post: Gay Key West Couple to Marry at Midnight: Watch It LIVE Here »