Augmented reality has long since been one of the most promising visions of the future presented by Silicon Valley. As cell phones have grown more powerful and wearable devices have become more ubiquitous, that vision has come increasingly closer to realization. In a new video originally meant to be screened at South By Southwest, Magic Leap, a company specializing in AR and backed by Google, shares a little bit of the software its been working on.

Most forms of AR–like Microsoft's HoloLens–are a virtual overlays projected onto physical objects that can only be seen through a digital lens. Magic Leap’s take on the tech showcases a literal first person shooter game in which static physical objects become weapons that can be used to fight enemies in a video game.

Magic Leap also shows a few brief moments of interacting with e-mail as if it were a tangible thing and sending it with the flick of a wrist. It’s difficult to say just how close this concept video is to what Magic Leap may eventually bring to the consumer market, but the company’s PR director says that the Magic Leap team is playing a version of this game around the office right now. 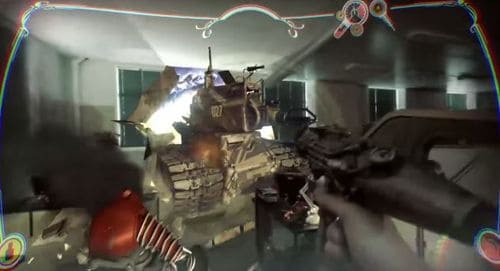 Previous Post: « Texas Republican Lawmaker Smacks Down Witness From Anti-Gay Hate Group: VIDEO
Next Post: Rep. Randy Forbes and Sen. James Lankford: Chipotle Can Choose Its Meat, So We Can Discriminate Against Gays »