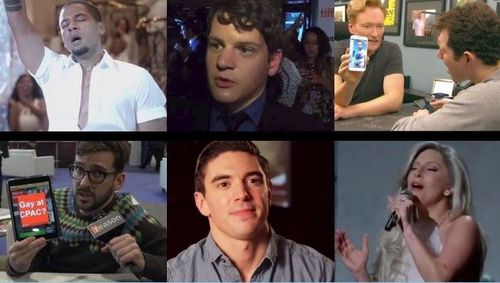 NFL free agent Michael Sam and his fiancé Vito Cammisano arrived at LAX this week and were immediately confronted by an aggressive TMZ cameraman who began questioning them about their engagement and wedding date. Sam, apparently a big Game of Thrones fan, proceeded to troll the guy with a lavish description of his upcoming wedding in Westeros. The photog didn't have a clue what Sam was talking about…making the ruse even more entertaining. "Maybe — gay people — you don't know our terminology," Sam quipped.

With the Conservative Political Action Conference bringing the country's most ardent right-wingers together under one roof, Reason TV decided to fire up the old Grindr and see how many gay men they could find at the Gaylord Resort in Washington D.C. Turns out…quite a few.

Fans of AMC's zombie-apocalypse series The Walking Dead were treated to a man-on-man smooch Sunday night that ended up setting social media ablaze with talk of the lip-lock. Many fans were morally upset by the kiss, which is a little surprising considering the show is full of cannibalism, murders, child killing, and other gruesome scenes. Apparently seeing a brief moment of intimacy between two dudes is too much though…

12. Steve Grand Talks About Debut Album 'All-American Boy', His Desire to Be a 'Uniter'

Steve Grand, who catapulted to success on the heels of his super-viral "All-American Boy" video (now closing in on 4 million views), dropped an EPK this week talking about his upcoming album of the same name, which he has been working on since and is released on March 24.
Grand also pushed back against those who would call gay visibility "no big deal anymore" saying:
"Who cares? You know who cares are the kids that are really struggling with this. The kids who feel like they would still rather be dead than live life as a gay person. I’m thinking about them all the time when I’m doing these things. Because deep down we really all just want to loved, we want to experience love, we want to give love, we want to take in love, and we want to feel valued and understood…"

11. Watch This Self-Described 'Conservative Southern Baptist' Mom Talk About Her Family's Campaign for Trans Acceptance
It's no secret that the Southern Baptist denomination is no friend to LGBT people, but Debi Jackson, a self-described “conservative southern Baptist” from Alabama and mother of a transgender child, is hoping to change things from the inside. Jackson recently sat down with GLAAD's Claire Pires to talk about her campaign to encourage others to accept trans children. Well worth a watch.

10. What Makes Gay Love Last? New Romantic Comedy 'That's Not Us' Will Try to Find Out
That's Not Us, a new film executive produced and co-starring Mark Berger (associate producer for Broadway's Hedwig and the Angry Inch) and directed by a gay couple, William Sullivan and Derek Dodge (DP), is nearing the end of its crowdfunding campaign. The film, shot over 8 days and completely improvised, looks to be a thoughtful and funny exploration of long-term relationships, gay and straight. Check out a trailer below:

Fun fact: 85% of state judges in America are elected. Unsurprisingly, this didn't sit well with John Oliver, who devoted his top story on Sunday's Last Week Tonight to highlighting the numerous conflicts of interest that arise when judges must pander to the electorate and accept campaign money in order to keep their jobs.

Exhibit A on Oliver's list of problematic judges is Alabama Supreme Court Chief Justice Roy Moore, who Oliver says is living up to his state slogan "Alabama: Boldly refusing to accept diversity and the inevitable since 1819" with his continued efforts to try and stop gay marriage.

8. MSNBC Highlights the Queer Origins of #BlackLivesMatter
#BlackLivesMatter, the emblematic symbol of the current movement agitating for wider recognition of violence perpetrated against minorities, can interestingly enough trace its roots back to the black queer community. In a MSNBC mini-documentary, viewers hear the origin story of the world-wide movement as told by co-founder Patrisse Cullors, a queer woman of color.

7. Billy Eichner Helps Conan Make a Gay Connection on Grindr
Conan O'Brien enlists the help of gay comedian Billy Eichner to create a Grindr profile and see if the "ginger sugar daddy" can survive in a world of "musculos", "winter pelts" and "looking to suck". Enough said.

Taking viewers on a trip back in time to uncover the insidious origins of the bill, Baume reveals how the benign-sounding "Intrastate Commerce Improvement Act" could very well serve as a blueprint for future anti-LGBT laws across the country.

5. Empire's Gay Character Sings His Way Out of the Closet

Empire continued its take on the complicated relationship between homophobic parents and their gay children with Jamal (Jussie Smollett) coming out to his hip hop mogul father (Terrence Howard) through song. Judging by his reaction, dad wasn't pleased.

Screenwriter Graham Moore, who won an Oscar last Sunday for his script for The Imitation Game, captured the hearts of many with his call to young viewers to "stay weird" in the face of being ostracized by others. In an interview with Daily Xtra, Moore spoke at length about why he became obsessed with telling the story of fellow "outsider" Alan Turing.

I think there could be a young Alan Turing out there today, a genius who is being discriminated against in his or her own time for reasons beyond his or her control. I think that's why I wanted to write the story, that's why I became obsessed with the story of Alan Turing…I was an outsider as a kid, I felt different than everyone else growing up around me and Alan Turing is a testament to that, to what someone outside of the mainstream can achieve, and is capable of."

3. Fox News Rallies Behind Christian Florist who Refused to Do Gay Couple's Wedding

Baronelle Stutzman, the Washington florist who was found to be in violation of the state's anti-discrimination laws for refusing to provide flowers for a longtime gay customer's wedding, found the perfect platform to spread awareness of her anti-gay martyrdom: Fox News.

2. Lady Gaga Gives a Stunning The Sound of Music Tribute Performance at the Oscars

Give it another watch. You know you want to.

1. VICE Takes You Inside the Tragic and Deadly World of Gay 'Conversion' Therapy

This VICE special report is a sad but necessary look into the world of conversion therapy, the discredited practice of patients attempting to be "cured" of their homosexuality. The three part documentary shows you that many in our community still have a long ways to go before they reach true self-acceptance.