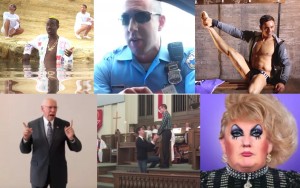 We’ve got the recap right here:

10. Donald Trump’s Drag Makeover is Both Terrifying and Hilarious

What do you think Donald Trump’s drag name would be? Bonus points for creativity.

A sad reminder of the casual homophobia still thrown around by some today.

7. Tom Daley Takes You Behind the Scenes of His Slick New Calendar Shoot

Outside of the Warwick Rowers, Tom Daley might be the best way to keep track of your dates, deadlines, and other calendar-related needs.

The first single from Le1f’s forthcoming album Riot Boi is called “Koi” and the trippy music video co-stars a brightly-colored school of koi, a set of oversized bubbles, and a giant set of pink sequined lips.

4. Donald Trump Asked How He’d Explain His Opposition to Gay Marriage to a Gay Kid

Here’s Trump’s answer to the question of how he’d explain his opposition to same-sex marriage to a gay son or daughter or grandchild:

Not a video but too important not to include in this week’s round-up. Casey Davis, the Casey County, Kentucky clerk who is one of three county clerks in that state defying the Supreme Court’s ruling in Obergefell v. Hodges, which legalized same-sex marriage nationwide, says he’s willing to die fighting for man-woman marriage.

The martyr complex runs deep in this one.

A Methodist congregation in Austin, Texas stood, cheered, and applauded after a gay man made a surprise marriage proposal on the altar during the church service.

A heartwarming surprise for a state and denomination that are not exactly known for their LGBT inclusiveness.

John Oliver is spot on as always in this excellent segment from last Sunday’s Last Week Tonight.

Want more LGBT videos in your newsfeed? Click HERE and LIKE our page on Facebook. Select “get notifications” in pulldown menu to receive our headlines in your feed.