On Wednesday night, members of Congress came together with religious leaders in the Capitol’s Statuary Hall for an annual prayer service to warn of heavenly punishments if the U.S. legalizes same-sex marriage

On Wednesday night, members of Congress came together with religious leaders in the Capitol's Statuary Hall for an annual prayer service to warn of heavenly punishments if the U.S. legalizes same-sex marriage, reports Right Wing Watch.

The 2-hour Washington: A Man of Prayer event is designed to honor the anniversary of George Washington's first presidential inauguration.

However, a number of reps and religious leaders took the opportunity to warn of coming calamities if SCOTUS rules in favor of marriage equality.

While Rep. Doug LaMalfa (above left, R-NC) voiced concern about the "seemingly godless times" in which this nation finds itself, fellow Republican Bill Flores (above right, R-TX) said that "we are truly a troubled nation" in which Christians are being ridiculed and persecuted for defending the family and their faith. Just this week, Flores made headlines for tying the Baltimore riots to gay marriage.

End Times rabbi Jonathan Cahn (below) said the Supreme Court would bring God's judgment upon this nation if it strikes down state marriage bans: 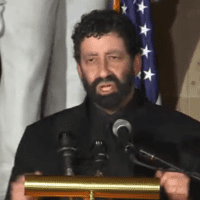 "The Supreme Court opens its sessions with the words 'God save the United States and this honorable court.’ But if this honorable court should overrule the word of God and strike down the eternal rules of order that Heaven itself hath ordained, how then will God save it?

"Supreme Court justices, can you judge the ways of God? Can you, with man-made verdicts, overrule the eternal laws of God? There is another court and there is another judge and before him, all men and all judges will give account.

"If the nation's high court should pass judgement on the Almighty, should you then be surprised that the Almighty should then pass judgment on the court and that nation?"