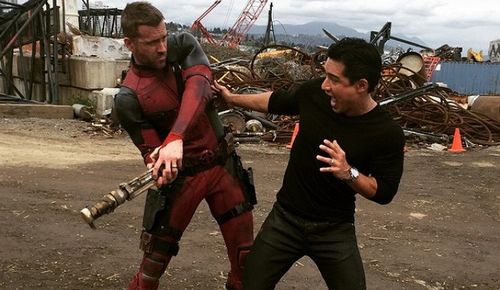 There are some actors whose casting in certain roles makes it feel as if they were born to play them. Hugh Jackman was born to play Woverine and Chris Hemsworth was born to play Thor, but Ryan Reynolds? Ryan Reynolds was born to play Deadpool. Outside of superhero circles Deadpool isn’t exactly as big a name as any of the Avengers or the X-Men, but ever since word first began to spread that Fox was interested in producing a film centered around the ‘merc with a mouth,’ Reynolds has been most fans’ number one pick for the part.

After a widely panned (and horribly written) appearance as the character in X-Men Origins: Wolverine and a much better received appearance as Deadpool in leaked test footage for a solo film, Reynolds finally signed on to play the character in his own film last year. The early promotional press for the super-flick has been promising, if vastly different from that of most big budget action movies. Reynolds’s latest interview with Extra isn’t the same fourth-wall breaking fan service as his last but it definitely gives you an idea of just how our live action Wade Wilson is going to be wearing that iconic suit. (Hint: he wears it well.)

Check out Ryan Reynolds’s latest Deadpool interview AFTER THE JUMP…