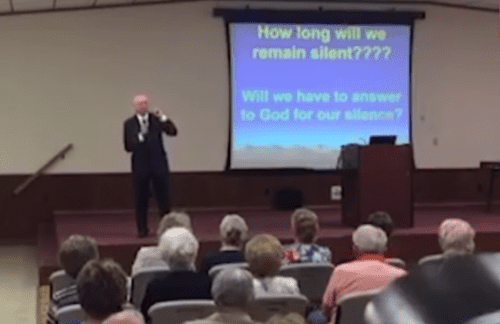 Presidential hopeful Ted Cruz's father Rafael Cruz spoke at an event in Brenham, Texas warning attendees that the Supreme Court's ruling on gay marriage is "an ominous decision," that determines, "whether the definition of marriage we have had for 6,000 years is going to be thrown out the window," reports Right Wing Watch.

Cruz senior proceeded to quote pastor and German dissident Dietrich Bonhoeffer, who famously spoke out against German citizens' silence toward Nazi Germany's systematic execution of Jewish people and other minority groups throughout Europe during World War II. Cruz likened this silence to Christians remaining quiet in the face of "homosexual marriage."

"How long are we going to remain silent? Or perhaps the more important question is are we going to have to answer to God for our silence? You know, silence is not an option."

You can watch Cruz senior grossly misquote Bonhoeffer, if you can stomach it, AFTER THE JUMP…

Previous Post: « Meet the LGBT Characters in the Wachowski’s Upcoming Netflix Sci-Fi Series ‘Sense8’ – VIDEO
Next Post: Why Do People Cheat? This Spellbinding TED Talk Offers a Wealth of Insight on Infidelity: VIDEO »