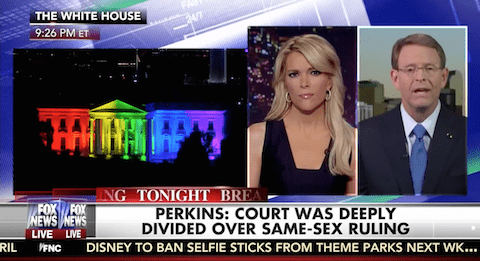 The Family Research Council’s Tony Perkins said during interviews with CBSN and FOX News that despite the overwhelming win for same-marriage rights on Friday, the fight against gay marriage isn’t over. In the two interviews Perkins cited that despite the decision in the Roe V. Wade abortion case, Americans still remain divided over the contentious issue of abortion and that the Obergefell V. Hodges case will be just as contentious as the Wade decision for years to come.

Perkins believes the Obergefell decision only serves to divide the nation further and said that the court can “make it right, but not moral,” yet Perkins forgets that FRC leaders have been caught in their own moral lapses. Perkins stated that of the pastors and reverends he spoke with, none of them intend to abide by the decision the Supreme Court made yesterday and remain defiant. Perkins commonly cited religious freedom and Biblical passages to reinforce his hollow points; watch Perkins’ official statements regarding SCOTUS’ decision below: