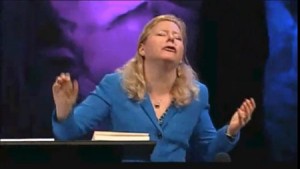 Listen to the audio, where she mentions getting down on her knees for god for a “ridiculous” prayer, below: