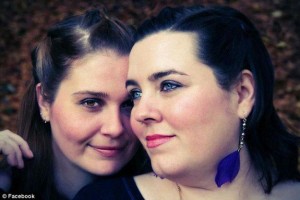 By now everyone on the planet has likely heard the story of Sweet Cakes, the Oregon bakery found guilty of discriminating against a lesbian couple and fined $135,000 because of the emotional and physical suffering they caused after denying the couple a wedding cake in January 2013.

In the ongoing culture war coverage of the case, however, one side of the story has been noticeably absent. In an interview with Willamette Week, Rachel Cryer and Laurel Bowman finally break their silence on their side of the story and detail the shame and embarrassment felt after being turned away from Sweet Cakes owners Melissa and Aaron Klein.

“People might feel more sympathy for us if somebody hit me rather than just denying me a cake,” admits Rachel. “But the hurt, whether it’s physical or emotional, is the same. We are treated like second-class citizens. That’s whether you want to deny me something or walk up and hit me just because I was born gay.”

Rachel says she first discovered the Gresham bakery online in 2011 when she was looking for a wedding cake to celebrate her mother’s remarriage. She says she and her mother developed a “rapport” with Melissa and that the cake was “the most impressive thing about my mom’s wedding.”

Rachel also notes Melissa Klein knew she was in a relationship with another woman and had initially told her to come back if she needed another wedding cake (a claim the Kleins’ lawyer disputes) .

Actually [Melissa Klein] said, “Have you thought about getting married?” and Rachel said, “Oh no, I’m never getting married.” And we just made the joke about it, and she said, “Well, if you decide to, come back.” And that was the last thing we really said about it.

Following the death of a close friend of Laurel’s in 2011, Rachel and Laurel stepped up to foster the friend’s two children and began to reconsider the idea of marriage after they decided they wanted to adopt the kids.

“I never wanted to have children, but when the children were placed with us, we had the option to help these kids that I already loved so much.” says Rachel “And they needed us so much, and they’d been through so much, I felt like they needed the stability of knowing that we were committed both to each other and to them.”

With marriage on the mind, Rachel (accompanied by her mother) returned to Sweet Cakes seeking a wedding cake of her own, but the warm reception they expected was nowhere to be found. Aaron Klein quoted a Bible verse calling homosexuality an “abomination” and told Rachel that Sweet Cakes would not serve them.

“I was just humiliated that this happened in front of my mom, whom I spent all these years trying to convince that we deserved equal accommodation, and we deserve rights, and we deserve to be able to get married,” says Rachel.

Rachel returned home distraught and Laurel reacted by reaching for her phone and filing what she thought was a Better Business Bureau complaint.

“It turned out to be an Oregon Department of Justice complaint,” explains Laurel. “I didn’t know you could do something like that on a phone. I just thought it was a comment.”

After finding out about the complaint, the Aaron Klein posted the document on his Facebook, complete with Rachel and Laurel’s phone number and address. That’s when the death threats and vitriol started pouring in.

“Our neighbors had dropped off notes on our doorstep saying they don’t agree with what we are doing to this good, decent Christian family,” explains Laurel. “Your own neighbors are against you, and they’ve known you for years.”

The two women were forced to contact the FBI and later took the children and left the home, fearing the publicity would hurt their adoption efforts. The couple hoped the situation would blow over but the abuse and media circus continued.

Since then the Kleins have become the poster couple for the right-wing’s crusade against both marriage equality and non-discrimination protections. They’ve teamed up with the anti-LGBT hate group Family Research Council and raised over $450,000 through crowdfunding sources.

The entire interview HERE is absolutely a must read, not only to better understand the story but also to get a sense of what these women went through. The anti-gay side has been hard at work “humanizing” the other side of this controversy. It’s time we did the same for the real victims.