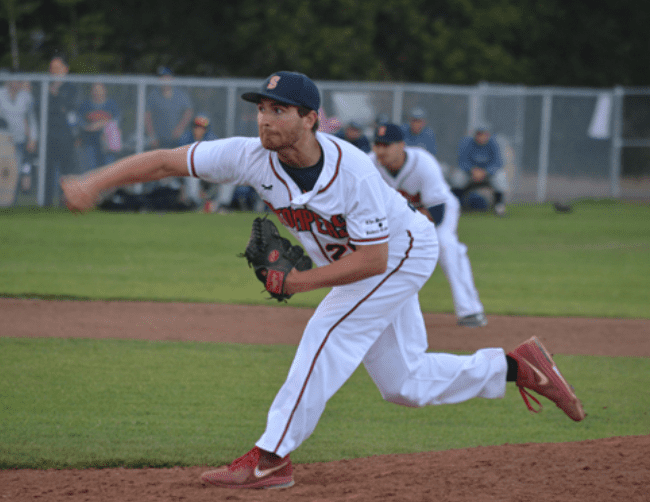 Pitcher Sean Conroy, whom we first told you about last month, is racking up some impressive numbers in his rookie year with the minor league Sonoma (California) Stompers.

Conroy, the first openly gay professional baseball player, made his first start on the team’s LGBT Pride Night — pitching a complete game shutout with 11 strikeouts as his teammates donned rainbow-colored socks in support. Conroy leads the team with an amazing 0.62 earned-run average, throwing 27 strikeouts and giving up just three walks in 28 innings, according to the team’s stat page.

Because he’s in the minor leagues, Conroy hasn’t gotten as much attention as Jason Collins, Michael Sam or Robbie Rogers. But Conroy tells USA Today Sports he dreams of playing Major League Baseball, although he knows it would be a challenge:

“Wherever I go next, whether that’s in the MLB or with another team, I’m going to be nervous,” Conroy told USA TODAY Sports. “Every time I’ve come out to a team, I’ve been able to feel out the situation first and kind of make sure there were no outliers who would react poorly. Anywhere I go, I’m going to have a reputation as a gay player because I’ve made national news. I’ll have to be more prepared on my first day.”

Conroy says he came out to his teammates shortly after joining the Stompers this summer, as a matter of respect. He was also out to his teammates in high school and college after coming out to his family at 16. He’s surprised at how much media attention he’s gotten, and he didn’t realize he was the first openly gay professional player. He also says he’s heard plenty of homophobic locker room talk, but feels his presence changes the way other players think:

“People think twice about it when they know there’s a gay guy on the team,” Conroy said. “They’ll apologize or say, ‘sorry, not in that way.’ It’s a teaching point in some regards. I would say that my teammates have grown up with the equality side of things, but it’s different when none of them have had that gay teammate interaction. The face to face meeting is so much different than what you see on the news.”

Conroy says he feels lucky to have had so much support from the Stompers. Shockingly, he earns only $650 a month on average and stays with host families during the season:

“I just love playing baseball,” Conroy said. “It’s my first year out of college. I’m trying to have a career at the highest level. If I ever get that chance, I’ll be ready.”

Previous Post: « This Madonna-Inspired Safer Sex PSA ‘Bitch I’m a Condom’ Will Have You Reaching for a Rubber: VIDEO
Next Post: NASA Releases First Full Image of Earth Since 1972, Discovers World Hasn’t Been Destroyed By Gay Marriage »