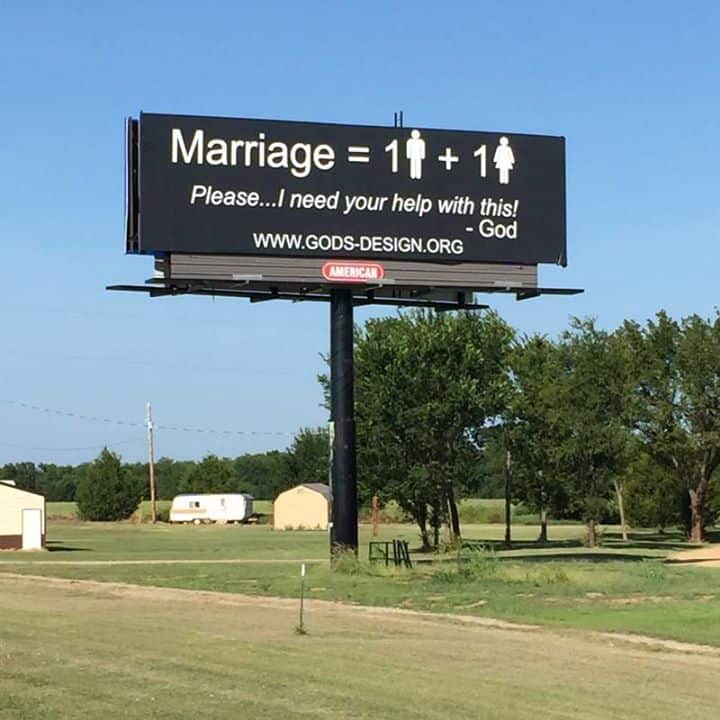 An Iowa couple who shut down their wedding business to avoid serving same-sex couples now wants to place 1,000 billboard across the country saying that, according to God, marriage is between one man and one woman.

The first billboard, shown above, reportedly went up July 24 near Durant, Oklahoma. 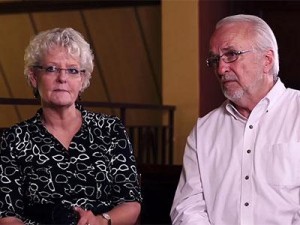 Dick and Betty Odgaard (right), a Mennonite couple who were the owners of the Görtz Haus Gallery in Grimes, Iowa, refused to host a same-sex couple’s wedding in 2013, prompting a civil rights complaint. The Odgaard’s eventually settled the complaint for $5,000 and agreed to no longer discriminate against same-sex couples. The Odgaards, who recently received support from Sen. Ted Cruz, say they shut down the gallery at the end of July due to lost business because they could no longer host weddings.

Now, the Odgaard’s have launched “God’s Original Design Ministry,” which hopes to place “1,000 points of light” across the nation in the form of anti-gay billboards. They’re also encouraging people to print out anti-gay marriage fliers from the ministry’s website and place them on people’s vehicles in church parking lots.

However, the Odgaard’s fundraising campaign is going about as well as they say their business did after they refused to serve same-sex couples. It’s unclear how much they’ve raised with a PayPal button on their website, but their Fund Me America page has raised only $153 — hardly enough to purchase one billboard, let alone 1,000.

The Odgaards have complained that they were inundated with hate mail and posts on social media attacking them for refusing to serve same-sex couples. But apparently they are gluttons for punishment, because their billboard campaign isn’t going over too well on Facebook, either. Here are just a few of the responses to their post about the billboard near Durant:

Previous Post: « John Oliver’s Ditty About D.C. Statehood Might Be the Most Catchy Song Ever: WATCH
Next Post: Eddie Redmayne Stuns as Trans Pioneer Lili Elbe In New ‘The Danish Girl’ Posters: UPDATED »