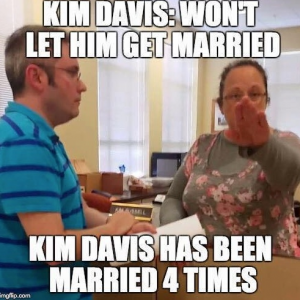 After a week of confusion and continued defiance, Kentucky county clerk Kim Davis and her lawyers have filed an emergency motion with the Sixth Circuit Court of Appeals seeking a stay on a federal judge’s ruling ordering Davis to issue marriage licenses to same-sex couples.

Filed on behalf of Davis by the anti-gay Christian litigation group Liberty Counsel, the motion argues that “a same-sex ‘marriage’ (‘SSM’) license issued on Davis’ authorization and bearing her name and imprimatur substantially and irreparably burdens Davis’ conscience and deeply-held, sincere religious beliefs, which dictate to Davis that such unions are not and cannot be ‘marriage.'”

The motion goes on to argue “that searing act of personal validation would forever echo in her conscience—and, if it happened, there is no absolution or correction that any earthly court can provide to rectify it.”

NOM had this to say about the case:

As the States move forward from the Obergefell decision, judges and legislators need to treat everyone with equality. We must uphold the First Amendment and allow those issuing marriage license to recuse themselves when they feel they could personally breach their deeply held religious beliefs.

NOM seems to be forgetting however that Davis forced her office not to issue same-sex marriage licenses (a deputy clerk in the Rowan County office was willing to issue licenses to same-sex couples but Davis wouldn’t allow it, insisting that this would also violate her religious beliefs because her name appears on the state-mandated, pre-printed form.)

Read the full emergency motion below: