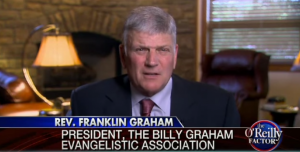 Franklin Graham, the son of preacher Billy Graham, is less than pleased with Target’s plan to stop using gender-specific signage in its children’s toys.

Blatantly fudging the distinction between gender and sex, Graham – who is thought to earn around $1 million per year for the services he provides to Samaritan’s Purse and Billy Graham Evangelistic Association – took to Facebook to suggest that god-fearing Christians let Target know that they are “perfectly willing to shop where the genders God created are appreciated.”

His #OffTarget post has been so far liked by more than 100k people.

The Washington Post reports that Target will stop using gender specific signage in their stores. In order to be gender-neutral, they won’t be separating things like toys and bedding into boys’ and girls’ sections. Oh really? And they won’t be using pink and blue colors to identify sexes. I think Target may be forgetting who has made their stores strong. It’s not gender-neutral people out there—it’s working American families, fathers and mothers with boys and girls they love. What’s next? Are they going to try to make people believe that pink or blue baby showers are politically incorrect? I have news for them and for everyone else—God created two different genders. Jesus said, “Have you not read that He who created them from the beginning made them male and female (Matthew 19:4). You can’t get any clearer than that. If you agree, share in the comments below—and let Target know what you think. Let them know that you are perfectly willing to shop where the genders God created are appreciated. (1-800-440-0680) Target is way off-target on this one!

Previous Post: « Murder Of Black Transwoman in Dallas Marks 11th Case Of Trans PoC Homicide In 2015
Next Post: Gay Couples Are About to Score a Slam-Dunk Victory Over Texas AG Ken Paxton »