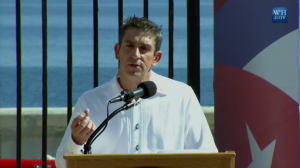 Secretary of State John Kerry is in Havana today to speak at the re-opening ceremony for the U.S. Embassy in Cuba. He is joined by openly gay poet Richard Blanco, who was asked by the Department of State to compose a new poem for the occasion, “Matters of the Sea” or ” “Cosas Del Mar.”

Blanco, who is the son of a Cuban exile family, told MSNBC this week that the poem was one of the most emotional and complex poems he’d written:

It seems like so much of what all my writing has been about leading up to this very moment, the negotiation of cultural identities. This just seems so surreal still…This is really in some sense just the beginning, the dawn of new things to come…I’ve always felt like my heart has been split between two countries, two heritages, two loyalties. And so the poem is in a way reconciling that part of me, personally. What I hope the poem does as well is bring us to another place of reconciliation, an emotional place of reconciliation…I see this as a moment of emotional truce.”

Blanco also recently spoke to NPR about his thoughts on Cuba’s relations with the LGBT community.

You know, in all my trips to Cuba, I’ve always gone to visit with family. And so I’m sort of a little outside of the loop of some of those things because I’m just hanging out with my family, living with them. So the LGBT community was something that I actually had very misunderstood for most of my trips. I just didn’t think there was even any kind of LGBT community to be had. But I think there has been a little bit more movement in that direction. However, in general, Latin American countries’ sense of homosexuality is very different than the United States or – you know, the sense of homophobia is not a religious-based sort of homophobia but one about machismo…

Watch Blanco read his poem below:

In 2013, Blanco was chosen to compose a poem at President Obama’s second inauguration.