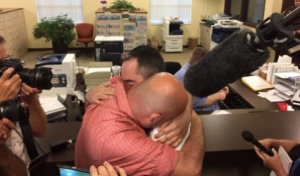 Despite Gov. Steve Beshear’s announcement yesterday that the state of Kentucky would recognize marriage licenses issued by Rowan County deputy clerks without Kim Davis’ name on the form, the ACLU has expressed concerns over their validity.

According to the Associated Press, lawyers representing the same-sex couples who sued Davis said marriage licenses issued following Davis’s arrest could be considered legally invalid given the alterations and that they were reviewing legal options.

In the space that previously listed Davis’ position, the form now reads “pursuant to federal order.”

The form of marriage license prescribed in KRS 402.100 shall be uniform throughout this state, and every license blank shall contain the identical words and figures provided in the form  prescribed  by  that  section.  In  issuing  the  license the  clerk  shall  deliver  it  in  its entirety  to  the  licensee.  The  clerk  shall  see  to it  that  every  blank  space  required  to  be filled by the applicants is so filled before delivering it to the licensee.