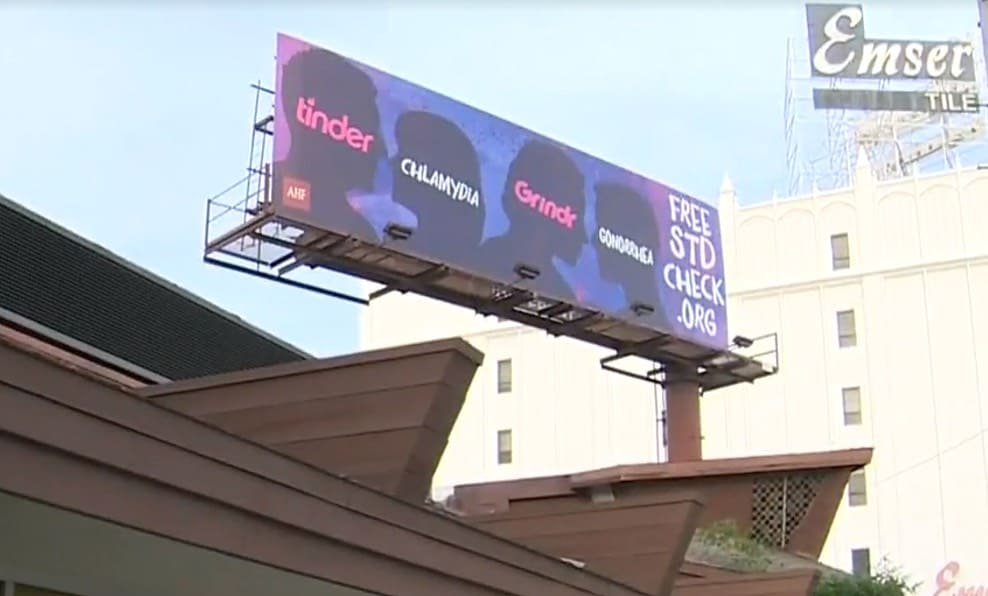 A newly-installed billboard in West Hollywood is getting a lot of attention. It links dating/hook-up apps Grindr and Tinder with STDs chlamydia and gonorrhea. The AIDS Healthcare Foundation “posted its warnings about Internet hookups and venereal disease in more than 50 spots around the city last week” according to the Washington Post.

The L.A. Times reports that Tinder, whose headquarters is just a few blocks from the billboard, is pissed:

“These unprovoked and wholly unsubstantiated accusations are made to irreparably damage Tinder’s reputation in an attempt to encourage others to take an HIV test by your organization,” Tinder attorney Jonathan Reichman said in a letter to the foundation.

The foundation responded that it would not remove the billboard. It also referenced a Vanity Fair article that attributed a boom in casual hookups to the emergence of dating apps like Tinder. The foundation also cited a report from the Rhode Island Department of Health that said STD rates in that state increased from 2013 to 2014…

…The foundation also linked to a study published in the U.S. National Library of Medicine National Institutes of Health, which reported gay men who used dating apps for meeting sexual partners were more likely to test positive for gonorrhea and chlamydia.

Grindr says it has dropped paid ads from AHF over the billboards “in order to speak with them and assess our relationship.”