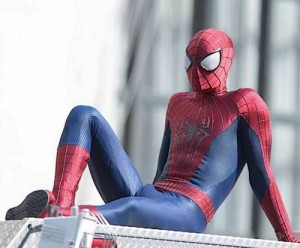 Andrew Garfield has previously expressed his desire to see a gay Spider-Man someday, but now the 32-year-old actor is ready for a pansexual web-slinger.

“I’m excited to get to the point where we don’t have to have this conversation, where we can have a pansexual Spider-Man,” said Garfield recently in reaction to a question about Spidey’s sexual preference.

For Garfield, the reason Spider-Man is the perfect hero to break the mold is because the costumed crusader is a mystery to his world. “The beauty about Spider-Man, for me, is that he’s covered head to toe,” he said. “That’s why everyone thinks it could be them in that suit. You don’t see skin color. You don’t see sexual orientation. You don’t see how old the person is, gender, the whole thing. I celebrate that. Anyone can be a hero in their own lives.”

“We’re scared of things that aren’t us,” he continued. “Love is love. Skin is skin. Flesh is flesh. We’re all wrapped in the same thing. I have no preference.”