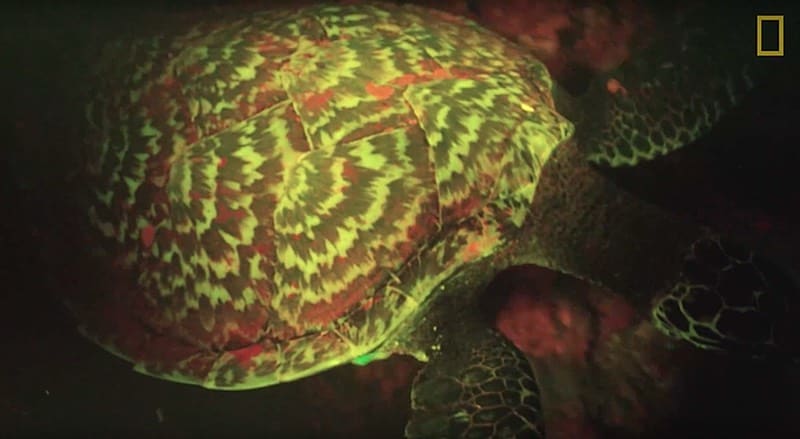 Marine biologists diving near the Solomon Islands in the South Pacific were shocked when they came across a glowing sea turtle, the first bioluminescent reptile ever recorded.

The turtle, a hawksbill sea turtle, is critically endangered. The researchers were diving with a black light, looking at corals and other marine life when it swam into range and they captured it on film, National Geographic reports:

It looked like a big spaceship gliding into view, he recalls: An alien craft with a patchwork of neon green and red all over its head and body.

The marine biologist captured the turtle sighting on a video camera system, whose only artificial illumination was a blue light that matched the blue light of the surrounding ocean. A yellow filter on the camera allowed the scientists to pick up fluorescing organisms.

Gruber followed the turtle for a short while, but “after a few moments I let it go because I didn’t want to harass it.” The hawksbill proceeded to dive down into the pitch-black ocean.

The turtle appeared to glow both red and green, unusual for bioluminescent organisms. But Gruber said that the red glow may be caused by algae attached to its shell.