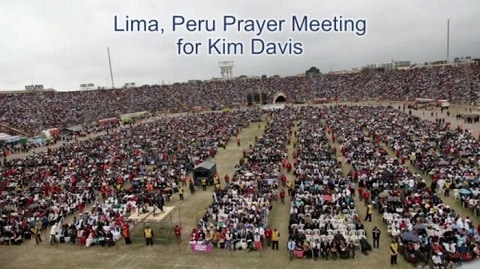 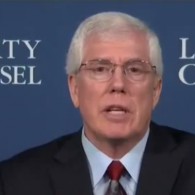 Anti-gay litigation group Liberty Counsel (LC) has admitted that a photo purporting to show a 100,000-strong rally in Peru in support of Kim Davis is a fake, reports Think Progress.

LC head honcho and Davis’s lawyer Mat Staver (right) displayed the photo at last week’s Values Voter Summit.  Although LC has since admitted that the photo is actually of the May 2014 “Jesus Loves You and Changes You” convention, officials have placed the blame at the feet of Peruvian lawmaker Julio Rosas.

@thinkprogress picture & story came to us from Peru @juliorosas1 and we repeated it.

Despite earlier insisting that Rosas had confirmed the validity of the photo, a press release yesterday once again blamed the Peruvian:

“When some questioned whether such a large event occurred, Liberty Counsel sought verification this past Saturday and yesterday.

“It now appears that while prayer meetings did occur throughout Peru, the photograph presented to Mat Staver was an honest mistake and was of a different Christian assembly in a soccer field.”

Staver also made an attempt to cover his mistake, claiming that “there is widespread support for Kim Davis. Last week she was recognized by many people as she walked through the Philadelphia, New York LaGuardia, and Washington, D.C. Reagan airports. People gave her a thumbs up sign or verbally expressed support for Kim Davis. While she has obvious detractors, Kim Davis also has wide support.”

Earlier this month, Staver said that same-sex marriage is leading the U.S. “into the very pit of Hell.”