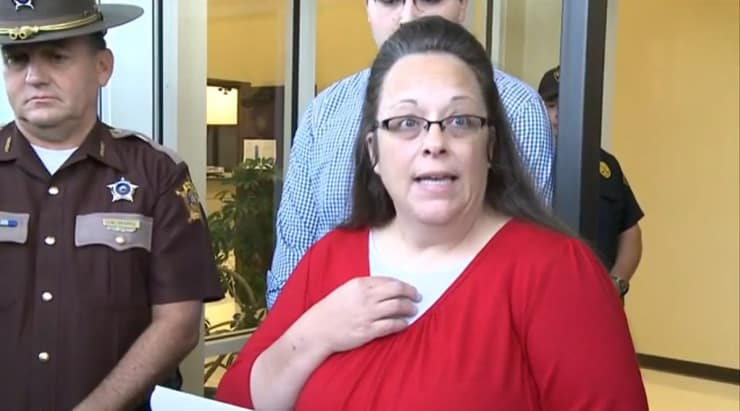 Pope Francis met with Kim Davis at the Vatican Embassy in Washington D.C., according to her lawyers at the Liberty Counsel, who claim:

During the meeting Pope Francis said, “Thank you for your courage.” Pope Francis also told Kim Davis, “Stay strong. He held out his hands and asked Kim to pray for him. Kim held his hands and said, “I will. Please pray for me,” and the Pope said he would. The two embraced. The Pontiff presented Kim and Joe Davis each with a Rosary that he personally blessed. Kim’s mother and father are Catholic, and Kim and Joe will present the Rosaries to her parents. Kim’s mother was the elected Clerk of Court for Rowan County for 37 years until her retirement in 2014.

Kim Davis said, “I was humbled to meet Pope Francis. Of all people, why me?” Davis continued, “I never thought I would meet the Pope. Who am I to have this rare opportunity? I am just a County Clerk who loves Jesus and desires with all my heart to serve him.” Kim said, “Pope Francis was kind, genuinely caring, and very personable. He even asked me to pray for him. Pope Francis thanked me for my courage and told me to ‘stay strong.'”

CBS News is also reporting the meeting and has reached out to the Vatican to confirm:

Claims made by Liberty Counsel lawyer Mat Staver at the weekend’s Values Voter Summit that over 100,000 people in Peru held a prayer rally in support of anti-gay county clerk Kim Davis were proven false after internet sleuths discovered that the photo shared by both Staver and wing nut Matt Barber was from a 2014 prayer rally known as “Jesús Te Ama Y Te Cambia” (“Jesus Loves You And Changes You).”.

Previous Post: « This Gay Marriage Proposal Trending on Chinese Social Media Will Melt Your Heart: WATCH
Next Post: Kim Davis Speaks Out About Meeting Pope; Vatican Will ‘Neither Confirm Nor Deny’ – WATCH »