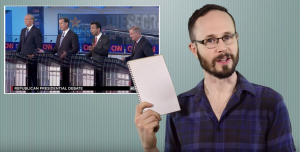 Writer Matt Baume has a new video out that takes a look at how the GOP candidates handled the “Kim Davis question” at both of the presidential debates last night.

As we reported previously, candidate answers varied widely, from “she should have been fired” to “she’s like the Columbine victim who stood up for her faith.”

Mike Huckabee, who stood by Davis at a rally when she was freed from the clink, had this to say:

“Republicans know they can’t get away with the kind of outright animus they used to,” explained Baume. “So now they have to be crafty about signaling their disapproval of homosexuality. Now it’s coded by referring to religious freedom or claiming that Christianity has been criminalized.”