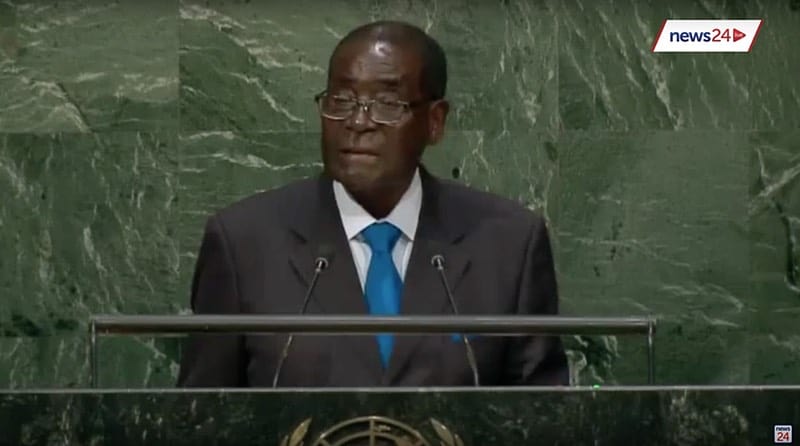 Zimbabwe’s dictator Robert Mugabe spoke to the United Nations this week. His speech was about rejecting western influence, but really about one of his favorite topics: the gays.

In a break from his prepared remarks, Mugabe said “We are not gays.”

“Respecting and upholding human rights is the obligation of all states, and is enshrined in the United Nations charter. Nowhere does the charter abrogate the right to some to sit in judgment over others, in carrying out this universal obligation. In that regard, we reject the politicization of this important issue and the application of double standards to victimize those who dare think and act independently of the self-anointed prefects of our time. We equally reject attempts to prescribe “new rights” that are contrary to our values, norms, traditions, and beliefs. We are not gays! Cooperation and respect for each other will advance the cause of human rights worldwide. Confrontation, vilification, and double-standards will not.”

Mugabe’s colorful homophobia may be earnestly held, but it’s also a play for populism at home and a way to divert attention from tougher issues. He’s used homophobia as a way to attack President Obama especially, who is popular in much of sub-Saharan Africa, and thus deflect American criticism of Zimbabwe’s dictatorial regime.

Of course Towleroad readers are familiar with these distractions.

Mugabe has previously claimed that gay men pose a threat to women’s rights, condemned the “gay filth” of European culture, as well as threatened the U.K.’s prime minister over their support of same-sex couples.

He has also spoken out in support of Uganda’s anti-gay law, promised to expel pro-gay diplomats from Zimbabwe, and has said he prefers to receive aid from anti-gay countries. In 2014, a group of men armed with guns, iron bars, and other blunt objects assaulted and injured some thirty-five attendees of a function organized by the Gays And Lesbians of Zimbabwe, a community volunteering group.