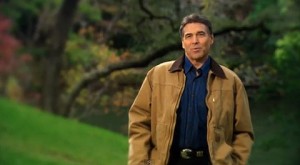 Rick Perry is bowing out of the 2016 Republican Party presidential race, according to two sources who spoke to The Associated Press today.

Perry will make the announcement tonight in St. Louis at a gathering of conservative activists. The gaffe-prone, longest-serving governor in Texas history struggled to rise above the crowded GOP pack this election cycle and was relegated to the less prestigious “kid’s table” during the first debate last month. Perry was scheduled to appear at the second-tier CNN debate next week alongside long-shots Bobby Jindal, Lindsey Graham, George Pataki, and Rick Santorum.

Related, Rick Perry: Boy Scouts ‘Would Be Better Off’ Without Gay Adult Leaders

Perry championed the state’s 2005 marriage amendment, before holding a ceremonial signing of the legislation at an evangelical church in Fort Worth. When asked what he’d say to gay military veterans who protested outside the signing ceremony, Perry said: “Texans made a decision about marriage and if there’s a state that has more lenient views than Texas, then maybe that’s a better place for them to live.”

Years before, Perry had called Texas’ sodomy ban “appropriate” before it was struck down by the U.S. Supreme Court in Lawrence v. Texas — but by 2011 he had apparently forgotten what the case was even about.

He has also repeatedly compared homosexuality to alcoholism, including as part of his staunch defense of the Boy Scouts’ ban on gays — a crusade which he once likened to opposing slavery.

Perry ran a decidedly homophobic presidential campaign in 2012, which he kicked off with a rally hosted by the American Family Association, an anti-LGBT hate group.

Previous Post: « Fall LGBT TV Preview: 8 New Shows To Watch
Next Post: Tom Daley Would Rather Be Too Tight Than Too Loose: WATCH »