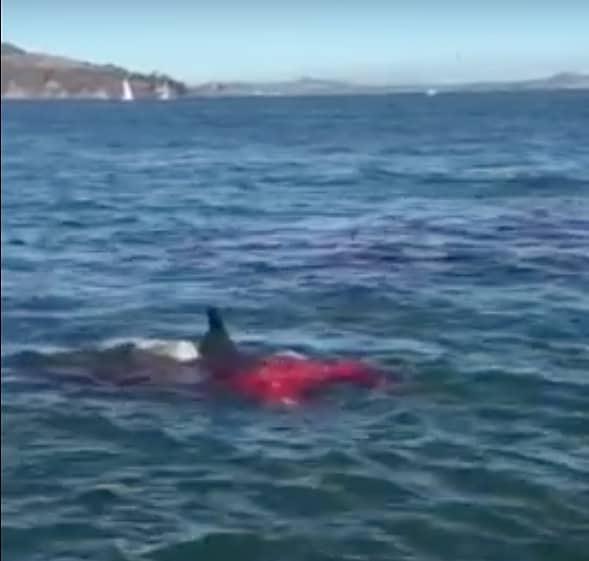 Tourists visiting the island prison of Alcatraz witnessed something few have ever seen: a great white shark predation of a seal or sea lion inside San Francisco Bay.

A video posted to YouTube by tourist Meredith Coppolo Shindler has over 475,000 views and is getting attention not only for the shark, but for the little boy heard on the video who is excited about the shark:

Said David McGuire, Director of the San Francisco based shark conservation group Shark Stewards and Research Associate at the California Academy of Sciences in a statement:

“This is the first recorded predation event I know in the San Francisco Bay. It definitely looks like a white shark, about 8-10 feet from the phone video sent to us. The tourists were pretty excited.”

Shark Stewards adds that the shark sighting is a sign that the Bay’s water is getting healthier:

Although there is no record of an attack on humans, great white sharks have been observed inside the Bay on several occassions. A study by the Stanford Tagging of Pacific Pelagics documented several tagged sharks entering and exting the Bay in a study published in the Proceedings of the Royal Society in 2009.

Five white sharks entered the Bay over a period of two years, one shark entering four times. The only documented white shark fatality in San Francisco came on May 7, 1959, when Albert Kogler Jr., 18, died while swimming in less than 15 feet of water after he was attacked off Baker Beach, about one mile west of the Golden Gate Bridge.

“For me its pretty exciting and a sign that the health is returning to the San Francisco Bay ecosystem. We swim in the Bay every day at the Dolphin Club without a shark encounter. Its why we call this month Sharktober.” said McGuire. “The risk of shark attack is extremely low. Over eighty swimmers from the Dolphin Club and South End Rowing Club swam from Alactraz last week, and another race is scheduled for next weekend. It is up to the leadership what to do, but I suspect this shark is well fed.”