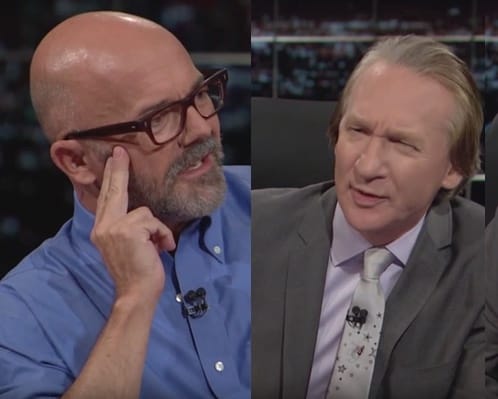 Bill Maher and Andrew Sullivan got into it over Hillary Clinton on Real Time last night, with Sullivan accusing Clinton of being a “talent-free hack.”

“She’s a talent-free hack. What are her talents? What has she done in her entire life in Washington? As Secretary of State even? The only decision you can really put on her was the disastrous Libya invasion which repeated every mistake that George W Bush made, that violated everything that Obama stood for, and has led to disaster…”

“Why do you hate her so much? Were you molested by a real estate lady or something? I can understand you not wanting Hillary to be president. I don’t understand anybody who hates her. She is a boring centrist. It should just never rise to the level of hatred.”

“How does an incredibly smart person make the kind of dumb error she did with an email server?”

“You are so in the bubble on this one,” said Maher.

Previous Post: « Andy Cohen and His Parents Talk About How He Came Out to Them: LISTEN
Next Post: ‘Days of Our Lives’ Kills Off Gay Legacy Character Will Horton »