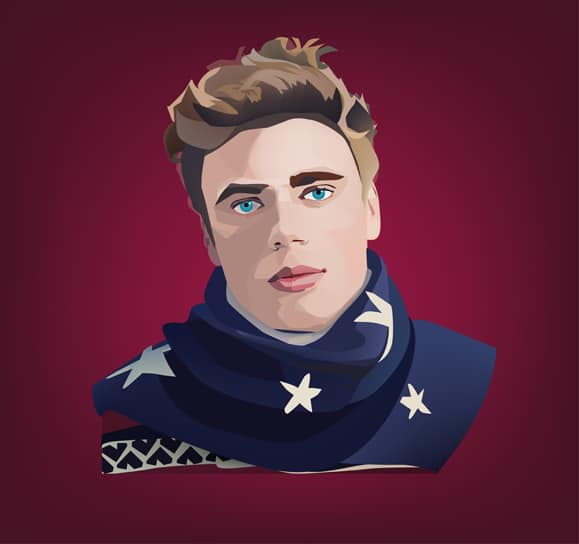 “It’s 2015. Why does this still matter? Does anyone even care anymore?”

If that’s your general response when some new public figure announces to the media that he or she is gay or lesbian, I understand. Maybe all your friends are progressive. Maybe your friends’ Facebook profiles were all bathed in rainbows after the Supreme Court legalized same-sex marriage nationwide.

But that’s only about half of America. I come from the other half.

The half that I come from, in rural America, is the same half that 5-time freeskiing world champion and Olympic silver medalist Gus Kenworthy comes from. He grew up in a rural town with a population of 2,000. Mine was even smaller — just 499. Within this half of America’s population — the half who say they wouldn’t attend a gay wedding if invited — coming out is still a very big deal. In this half of America, it’s still perfectly legal for a company to fire you simply because they don’t want to work with alongside a gay person. This is where people rally and cheer for anti-gay county clerks, or line up for anti-gay fast food joints serving chicken sandwiches. Here, bullied gay youngsters — as young as eleven years old — are still taking their own lives. In 2015. So, yes. This matters. This matters a lot.

And when you grow up gay in this part of America, where LGBT people are essentially invisible, just one hero can change your life. 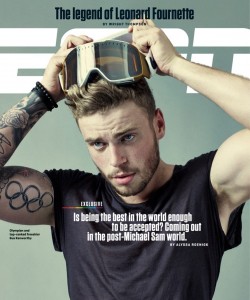 Unlike other highly visible athletes who have recently come out as gay — like the NFL’s Michael Sam or the NBA’s Jason Collins — Gus Kenworthy is at the absolute pinnacle of his sport. He’s ranked in the #1 spot of the AFP, the Association of Freeskiing Professionals. That’s number one in the world. Although Michael Sam’s draft-day kiss might have garnered bigger headlines, it’s Gus who may prove to have a bigger impact.

Because in a mountain town like Telluride, Colorado, where Gus Kenworthy grew up, the heroes are the people who can throw it down. Freestyle skiers and snowboarders enjoy rock star status in the Rockies. Centerfolds of radical dudes doing aerial tricks, pulled from the glossy pages of TransWorld Snowboarding and Powder magazine, are what get taped to teenagers’ bedroom walls. These are the heroes who Gus Kenworthy grew up seeing, and he aimed to become one himself. He was landing halfpipe inversions well before he could legally drive. By the time he hit his twenties, he was one of the stars of action ski flicks from Teton Gravity Research and Matchstick Productions. Every fall, those movies play at sold out screenings in mountain towns, and fans literally scream as they watch Gus and his pals defy gravity.

Unlike America’s classic team sports, freestyle skiing is an individual activity. You’d think this would make it easier to come out; you don’t need to worry whether your teammates will still throw you the ball, or if they’ll get weirded-out in the locker room. But as Gus described in his interview, the action sports culture expects conformity.

“The industry isn’t the most embracing of someone who’s different.  I’m nervous about that,” he said. To maintain your hero status — not to mention your sponsorships — you’ve got to be thought of as cool. That’s tough when you’re in the half of America where “that’s gay” is literally synonymous with uncool.

A friend of mine, who also grew up gay in rural America, spent his teenage years snowboarding in Colorado. He was good enough to get sponsored by a big snowboarding brand. “Being gay was never synonymous with being popular — especially in the world of snowboarding. The word ‘gay’ was used all the time as a replacement for ‘lame.’ It’s not that everything about our culture was gay-hating, but there was a lack of anyone who wasn’t straight,” he told me. “There definitely weren’t any out role-models in snow sports when I was riding competitively. The whole idea of a professional, sponsored snowboarder back then was to be progressive with the sport and always pushing boundaries… but also to be well-liked and cool with everyone.”

It was those pressures — to be cool and well-liked — that kept my friend in the closet until he’d given up his pro snowboarding career. The famous snowboarding star Travis Rice told me the same thing, when I was lucky enough to chat him up during a ski trip to Chile. When I asked if any pro snowboarders had ever come out to him personally, he said yes — but not until they’d given up pro snowboarding.

Gus told ESPN that the small-minded culture of conformity made him think about suicide. When you grow up gay in this part of America, you’ll do nearly anything to escape.

Ironically, the mountains were the first place I wanted to go. 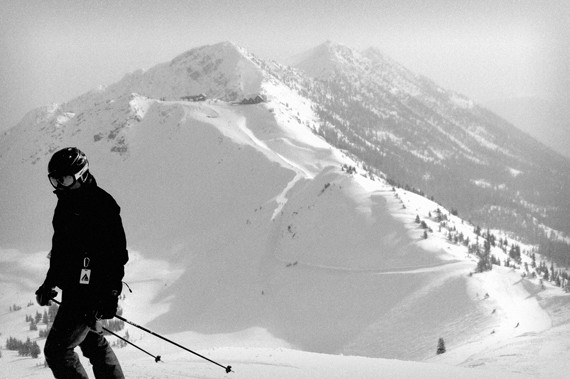 Like Gus, I learned to ski at a very young age. It was one of the few athletic activities that came easily to me. Unlike my high school gymnasium, where I was called ‘the f-word’ on a daily basis, skiing was blissfully all mine. It was just me, my skis, and the mountains, far away from the bullies slamming their lockers down the hall. I could speed down the slopes, as fast as any kid on the mountain, then float above everyone on the chair, taking in the kind of breathtaking views that made me never want to leave. My worries felt small.

And that’s one of the unique joys of skiing and snowboarding. It combines the adrenaline thrill of a downhill sprint with the awe-inspiring atmosphere of the mountains. It’s equal parts exhilaration and relaxation.

Granted, my skills were nowhere near what Gus can do. In junior high, my idea of an aerial trick was a two-foot jump at Alpine Valley, Wisconsin. But when you’re in love with skiing and snowboarding, it’s only natural to want to share it with the people who mean the most to you.

I spent my twenties taking ski trips to Utah with my two best friends, both straight. Those were the days when we felt extra brave. At the base of a chair lift, we’d go up to a skier like Gus and his pals, simply to ask: “what’s good today? Where are you finding the best snow?” If they told us to hike into some bowl or duck under some rope, we’d do it. You learn to listen to those kinds of skiers and follow their lead, especially if you want to stay safe in the rugged terrain that stretches along a ski resort’s highest boundary lines.

Those trips with my best buds were everything you’d want from an adventure in the mountains; nonstop laughs and endless days of perfect powder. But by the time I was ready to come out, each of them told me that they didn’t approve of my sexuality. One of them even gathered petitions in Massachusetts to campaign against same-sex marriage.

And when you experience actual rejection, you realize that the anti-gay sentiment in America has very real consequences. It can end friendships. On dark days, Gus Kenworthy’s life story can provide the one thing you need the most: the feeling that you’re not alone.

After I finally got the guts to come out to everybody, I learned that your true friends are the ones who want you to be yourself. But I knew I’d need some new buds who I could call up when I wanted to head to the hills. And so, about twelve years ago, I created a club for LGBT skiers and snowboarders and called it Ski Bums. I hoped I might be able to find a handful of gay folks who loved the mountains. Today, the club’s got more than 2,500 registered members, from all fifty states and more than twenty foreign countries. It’s the largest LGBT skiing organization in the world. Turns out that there’s a whole lot of people who grew up feeling the same way I did. 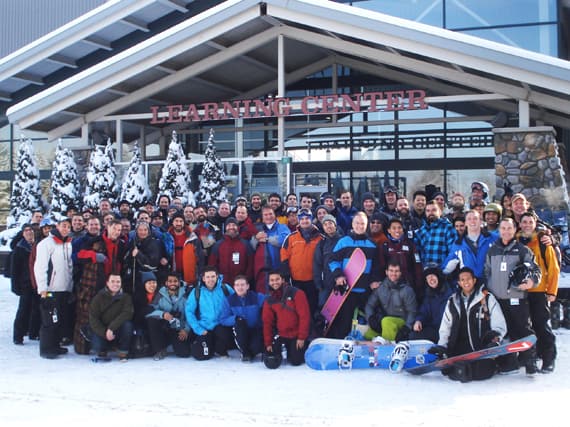 And that’s some of the real power of coming out. In an instant, you can go from feeling isolated and odd to feeling the support of a whole community of people who understand you.

From the sounds of things, that’s what Gus Kenworthy is experiencing right now. He’s already getting messages from teenagers who were inspired by his bravery. His sponsors, pro-level skiing peers, and Team USA teammates have tweeted, Instagrammed and Facebooked their overwhelming support. They’re proud to reveal which half of America they want to be in.

Gus Kenwworthy just became a true individual within an individual sport that expects you to be like everyone else. Today, he’s hearing from gay skiers and snowboarders around the world — the same kind of people who have become some of my greatest friends. None of us are truly alone when we’re skiing those rugged mountains. Someone like Gus already skied that terrain, saw how beautiful it was, and made it easier for the rest of us to find our way down.