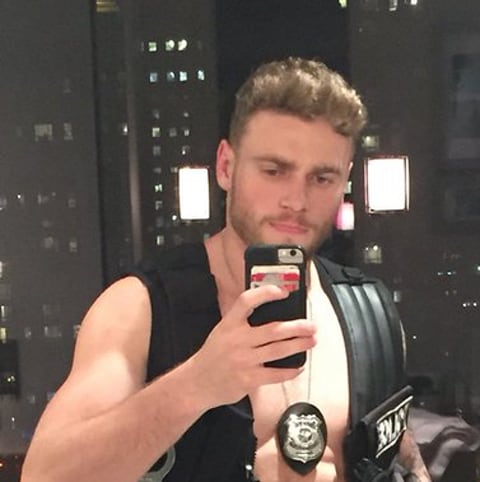 Last night, Kenworthy upped the ante and dressed as an arrestingly sexy cop. Wrote Kenworthy on Twitter, “My costume for last night’s party… Since I haven’t already been getting ENOUGH attention this past week! Lol.”

My costume for last night's party… Since I haven't already been getting ENOUGH attention this past week! Lol. pic.twitter.com/txsVPi4zy4

Kenworthy is currently in New York and has been seen taking in the city sights–shirtless, of course.

Kenworthy, who won the silver medal in freeskiing at the 2014 Olympic games in Sochi for Team USA, came out in an ESPN magazine profile earlier this month. Kenworthy also shared the news on social media. Wrote Kenworthy,

Wow, it feels good to write those words. For most of my life, I’ve been afraid to embrace that truth about myself. Recently though, I’ve gotten to the point where the pain of holding onto the lie is greater than the fear of letting go, and I’m very proud to finally be letting my guard down.