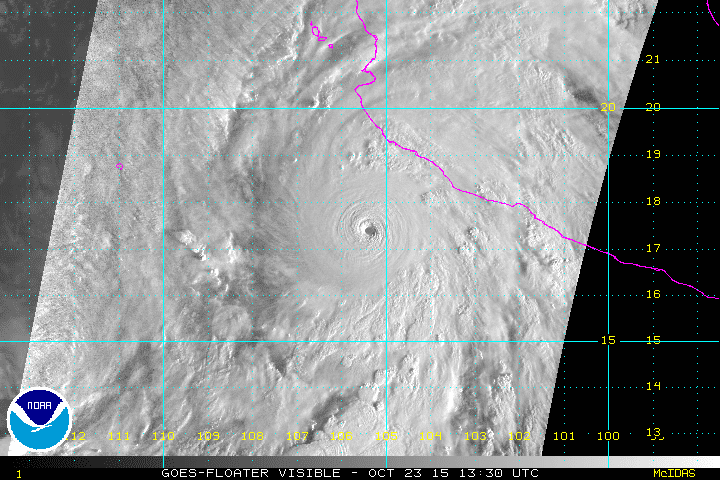 This is the first visible satellite image of Hurricane Patricia on its final approach to Mexico’s southwest coast where it will threaten Puerto Vallarta and Manzanillo, as well as possibly Acapulco. It’s a monster Category 5 with more than 200 mph, making it the most powerful hurricane ever recorded in the western hemisphere.

More than 7 million residents were told to prepare for the “worst-case scenario” as Patricia was expected to race ashore on Mexico’s Pacific coast between 6 p.m. and 10 p.m. ET Friday. The tourist magnets of Puerto Vallarta and Manzanillo were directly in the Category 5 storm’s projected path. NBC News meteorologist Bill Karins warned that Patricia would be “the most devastating storm to ever hit Mexico” with “catastrophic damage” likely between the posh resort of Puerto Vallarta and the bustling port city of Manzanillo.

With maximum sustained winds near 200 mph (325 kph), Patricia is the strongest storm ever recorded in the eastern Pacific or in the Atlantic, said Dave Roberts, a hurricane specialist at the U.S. National Hurricane Center.

Patricia’s power was comparable to that of Typhoon Haiyan, which left more than 7,300 dead or missing in the Philippines two years ago, according to the U.N.’s World Meteorological Organization. More than 4 million people were displaced and over 1 million houses were destroyed or damaged in 44 provinces in the central Visayas region, a large cluster of islands that includes some of the country’s poorest provinces.

A state of emergency has been declared by the federal government for 56 municipalities in the storm’s projected path, in the states of Colima, Nayarit and Jalisco.

We’re hoping it’s not as bad as predicted. Stay safe, everyone.

Previous Post: « Todrick Hall Flies Off to Neverland With A Magical Katy Perry Mash-Up: WATCH
Next Post: Martin Shkreli Gets Competition From Company That Will Sell AIDS Drug For $1 »