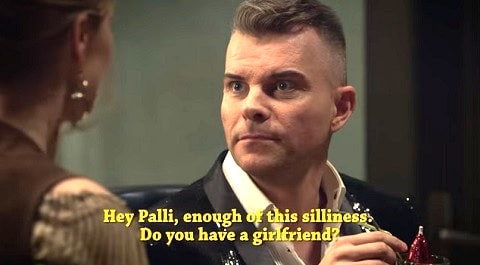 In an appearance on the longest-running Icelandic kids’ TV show, former Eurovision singer Páll Óskar explained in the simplest way how homosexuality works. Stundin Okkar, broadcast since 1966, featured a scene in which Óskar answers another character’s question, “Do you have a girlfriend?”

Related: These Kids Reacting to SCOTUS’ Gay Marriage Ruling Will Give You All The Feels: WATCH

“Think about what it would be like to live in a world where it didn’t matter who you were attracted to! We just need to create that world – that’s our responsibility.”

What a world indeed…

One of our readers notes that in 1993 the National Broadcaster (RÚV), which screens this program, hired a openly gay man to host the show, a man called Felix Bergson who hosted from 1994-1996. Felix was also very familiar to children in the ’90s as he was the voice of many known figures like adult Simba in the Lion King and Aladdin in the Disney cartoon.

Previous Post: « Here’s What You Can Do To Support The Fight For LGBT Equality In Houston: VIDEO
Next Post: Pat Robertson: ‘The Homosexuals’ are Using an ‘Organized Thrust’ to ‘Stick It To Christians’ – VIDEO »